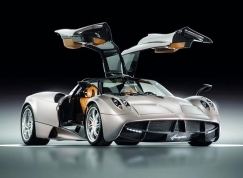 
Move over Mercedes, there’s a new Gullwing in town.

I-marbella's Johnny Gates with Mario Guarnieri from Guarnieri Concesionarios will be flying out to Milano to a world exclusive preview of the new Pagani Huayra Supercar.

The official launch won't be untill later in Geneva

Boutique Italian supercar builder Pagani has finally revealed its newest creation; the Huayra. Having made a splash with the outrageous Zonda hypercar, the company is upped the ante with a more powerful new model.

Named after the god of wind and powered by a twin turbocharged V12 Mercedes-Benz AMG engine, the new supercar should move like the wind. The engine produces a staggering 522kW (700hp) of power and more than 1000Nm of torque.

Pagani didn’t release any performance figures for the Huayra but did reveal the specially developed Pirelli tyres are rated to cope with speeds above 370km/h.

Using the knowledge gained on the track-only Zonda R project the Pagani engineers have relied heavily on lightweight composite materials to keep weight to a minimum. The Huayra’s monocoque is made of carbon-titanium and helps the car tip the scales at just 1350kg.

A dual-clutch gearbox was rejected because it weighed too much. Instead a seven-speed sequential transmission is used, with paddleshifts mounted behind the steering wheel .

A number of advanced aerodynamic gizmos have been used keep the car from taking off.  The front of the car can adjust its ride height on the move and works in tandem with four moveable flaps at the rear of the car.

But the most striking visual aspect of the car are its gullwing doors. The dramatic opening reveals an interior that makes heavy use of both leather and aluminium; for maximum style and minimum weight.

In a nod to comfort and convenience there is a touchscreen mounted in the centre of the dashboard to control the stereo, satellite navigation and Bluetooth functions.

The Huayra has been in development for more than five years. The company covered more than half a million kilometres during testing.