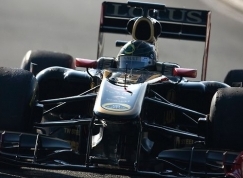 
NICK Heidfeld staked his claim to replace the injured Robert Kubica this season when posting the quickest time for Lotus Renault on the third day of F1 pre-season testing in Jerez, Spain yesterday.

Former Williams and Sauber driver Heidfeld is being put through his paces at Jerez to see how he handles the new Lotus Renault, with team principal Eric Boullier selecting him as favourite to replace Kubica.

After his first spin in the car, Heidfeld said: "I really enjoyed today. It's obviously going to take time to get used to it when it's the first time in a car and with a new team. My first impressions are very positive."

Heidfeld drove for BMW Sauber from 2006-09, and raced in five GPs for the stand-alone Sauber team last year.