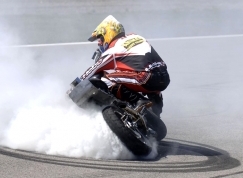 
“Ello Juan, Got a new Moto?”  Giles Brown, on the joys of motoring on the

“Ello Juan, Got a new Moto?”  Giles Brown, on the joys of motoring on the coast.

Marbella is a mad place for motoring. If you thought that everyday driving up and down the coast was bad enough, wait until the hordes of tourists in their rent-a-cars are joined by Mardrileño motorists. And just to add a little extra spice into the motoring mixture, there is the annual pilgrimage of Moroccans heading for the ferry at Algeciras. You won’t have seen anything like it since the Gumball Rally came to Hotel Puente Romano a couple of years ago.

Mind you, the coast has always been a magnet for a particular type of motoring maniac. The old N-340 was always described as the most dangerous road in Europe and a trip from Málaga airport soon proved why. This was in the days before the sweeping new autovia that now whisks you from the airport to be in the Marbella Club in time for lunch. Then, picking up friends from the airport used to be a whole day affair, undertaken with as much planning and trepidation as an expedition up the north face of the Eiger. The trip would take you through the centre of Marbella, around the frankly terrifying Fuengirola bends by the lighthouse and finally through the equally terrifying (from the sartorial point of view) Benalmadena and Torremolinos. All of this without a comforting concrete central reservation to be seen. My favourite section had to be the descending blind S bends between Los Boliches and Benalmadena. That’s the bit just outside the Star Club, so if I had stuffed my Mini into the scenery, getting mouth to mouth from the ‘hostesses’ would have been fun. No only that, but tunnels were few and far between, so if you wanted to turn left, you sat in the “fast lane” praying for a gap in the traffic with one eye on the rear view mirror, hoping that somebody wasn't’t going to clout you up the backside and knock you into the oncoming cars. The Marbella Club was forever picking up the bits of mangled Maserati, battered BMW and frankly Fxxxx Ferrari as the jet set waited to turn into the hotel. No wonder James Hunt felt at home here. Popping down from his Guadalmina house for a pint of milk must have been much the same as racing in  a Grand Prix.

Thankfully now, at least the roads are in better condition. The motorists, however, are still an interesting bunch. Let’s start with the tourists. Those can be divided into who categories; the British (and there’s a sub-category that we’ll come onto later) and the Madrileños. The British are easy to spot because they are invariably four of them in a small rent -a - car looking everywhere except at the road and doing about 30km/h. The normal habitat is the Golf Valley and be warned. This lot stop without warning at the mere sight of an English flag proclaiming beer, pies or Sunday Roasts. The sub-category is the British pedestrian, again most commonly sighted in the Golf Valley, who refuses to believe that roads in Spain are the same as roads back in Blighty and therefore walks down the middle of them – or, if they’re staying in Cortijo Blanco, attempts a headless chicken dash across four lane of traffic. Would they try this on the M25? I think not.

The Madrileños are much harder to spot these days. A few years ago they would be easy to identify because of the M on the numberplate. Every region had its own prefix and if you saw CO from Cordoba or CE for Ceuta, you new instinctively to stay well clear from them due to the unpredictable nature of their driving. Now that we’re all one happy European family however, the only way to spot a Madrileño is that he will be driving a Mercedes or BMW, be wearing Ray Bans, have Mario Conde–style pijo hair and a Burberry polo shirt. Once freed from the claustrophobic confines of the capital, the Madrileño speeds joyfully along the Marbella roads, until he realises that he doesn't’t know where he is and slams on the anchors.

But by far the most fun is to be had with the Moroccans. From cities all over Europe they head down to Algeciras for their two week visit to their home country, their families with them them and all available space inside and on the roof taken up with goods and gifts. The cars and vans, usually battered Renaults and Peugeots literally groan with the weight, and have given credence to what I hope is one of Marbella’s urban myths.Two Guardia Civil once stopped a car on the way to Morocco and, not liking the way the bundles were roped to the roof, ordered the whole lot to be unloaded. As they were doing this, a carpet fell of the roof, bounced down the road, and the body of an old Moroccan women fell out. The driver then explained that this was the body of his grandmother, who had died en route, and they had decided to take her back to her homeland…Another endearing fact about the Moroccans is that when they get to Marbella, they  have had little or no sleep, thus clouding their judgement. Don’t be surprised to see them overtaking in convoy, or reversing down the autovia when they realised they’ve taken the wrong turning. And for those of a nervous disposition, it might be advised to stay out of service station toilets during the month, as they tend to be ‘full of local colour’…

But I’m not just having a pop at the tourists in this article. The Spanish  have little competition when it comes to the road. And I blame this on one person in particular. Fernando Alonso. While he may be Spain’s first Formula One World Champion etc, his success has merely encouraged a generation of young guys in yellow Seat Leons that every Spaniard is a potential racing driver, and man, do they try and prove it. Try driving back from Tarifa on a Sunday and you’ll see more raw speed than a thrash metal concert and more dodgy passing manoeuvres than a singles bar in San Pedro in summer. You’d be well advised to take care when sitting at the traffic lights as well. You’ll have the Seat behind you reving his engine like a manic, the furry dice hanging from his rear view mirror vibrating madly, his hand posied over the horn to blast you the moment that the lights change to green. Whatever you do, DON’T put the pedal to the metal straight away – otherwise you’re more than likely to be T-boned by the other yellow Seat Leon, trying to beat the lights.

It doesn’t get any easier for pedistrians either. The acute lack of parking spaces means that every available bit of tarmac, grass verge and the occasional flowerbed is taken up by a 4x4, which means that you have to squeeze in single file between the cars and the buildings. GI foot patrols in the  dense Vietnamese jungles had it easier. And then you’ve got to try and cross the road. My first piece of advice is don’t stand too close to the edge of the curb. Otherwise you stand a higher than average percentage chance of being collected by the truck thundering through towing a Maersk container. (And as a quick digression, I’m still trying to work out why the container trucks aren’t forced to use the autovia) Then we come onto the difficult subject of pedestrian crossings. In northern Europe, pedestrian crossings are akin to world heritage sites – take one step on them and you are a protected species. In Spain, however, they take a different view. When you’ve lived down here for a while, you begin to understand that an awful lot  the Spanish psyche involves death and suffering to a large degree – which can be experienced most clearly in the bullfight. This world view also extends to the pedestrain crossing. Yes, you may have got halfway across the road, your Green Cross Code badge glinting in the harsh Andalucian sun, but that still makes you fair game for the average motorist because, I explained earlier “ the Spanish psyche involves death and suffering to a large degree”. And even if the approaching car does brake, he’s more than likely to be rammed up the backside by the yellow Seat Leon tailgating him. On no account whatsoever try crossing the road if there is a scooter approaching, especially if the gormless 16-year-old on it is wearing his (undone) crash helmet on top of his mullet (and as a teenager during the 80s, can someone please explain to me why the mullet is fashionable again?. Scooters don’t stop or anything or anyone.

And then you have the quad. In my opinion the work of Satan. Possibly the most offensive vehicle to hit the road since the Panzer tank took a Sunday drive through Poland. It’s not a car, it’s not a bike – it’s just a bloody pain in the arse. Now I am aware that there are sensible quad users (Drivers? Riders? Pilots? You figure it out!) who enjoy hours of outdoor pleasure at the weekend, keeping to designated offroad routes. But I’ve never met one. The only people I see driving quads are the mullet brigade again, normally tatooed, who find it impossible to drive/ride a quad without either pulling a wheelie, which is always great fun when you’re following the little sod on the main road, or skidding around corners. They also take the silencer off their machines, so they can produce a migrane inducing level of decibels. “Quadders” also have the endearing habit of tearing up and down any semi deserted strip of beach given half a chance, which is delighful when I’ve just opened the picnic hamper and am settling down with the first bottle of Veuve and cucumber sandwiches. If they let me mount a gun rack in my Daewoo, the mere sight or sound of a quad would send me scurrying towards it, trigger finger itching.

If you really want to enjoy your motoring take my advice. Buy GT4 for the Playstation and keep the fridge well stocked! And by the way “Think before you drink, before you drive” does not mean “make sure you’ve got enough beers for the journey”, even on the coast.