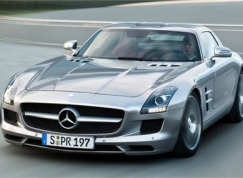 Mercedes-Benz has released pictures and details of its new “Gullwing” AMG SLS supercar ahead of its Frankfurt motor show debut. By RICHARD BLACKBURN.

The Gullwing has landed. Mercedes-Benz's hotly awaited spiritual successor to the classic 1950s 300SL sports car has broken cover ahead of its public debut at this month’s 2009 Frankfurt motor show.

Powered by a specially-tuned 420kW version of Mercedes-Benz’s fire-breathing 6.2-litre V8, the retro-styled SLS AMG promises to sprint from 0-100km/h in just 3.8 seconds.

It also promises to punch a sizeable hole in the pocket of anyone lucky enough to have survived the global financial crisis with their bank account intact.

Mercedes-Benz Australia won’t talk about local pricing, but expect the stunning sports car with the spectacular roof-hinged doors to cost a cool half-million when it arrives down under in June or July next year. Ironically, mint condition versions of the original 300SL are worth much more – a 300SL roadster recently sold at auction for $US805,000 ($930,000).

The hefty price tag hasn’t stopped five Australians from putting pen to paper for the supercar. A couple have even asked if they pay tens of thousands of dollars extra to have their cars air-freighted here before the official on-sale date.

Mercedes-Benz Australia has an initial allocation of 50 Gullwings for 2010, but expects to sell more and has asked for a bigger allotment.

Lindsay Fox, an avid Mercedes collector and owner of more than one 300SL, was hotly tipped to be one of the first buyers, but it is believed he hasn’t put pen to paper yet.

The AMG SLS Gullwing has stayed faithful to the original 300SL, sharing the classic car’s long flowing bonnet (it's almost 2m long), its gaping grille with huge three-pointed star in the centre and its bonnet vents and shark-like gills on the fenders. Other race-car cues include short rear overhangs, a low roof, bigger 20-inch rear wheels (the fronts are 19-inch) and a rear spoiler that extends automatically at 120km/h.

There’s a fair dose of modern race-bred technology to go with the classic lines, though.

A seven-speed dual-clutch transmission is mounted ahead of the rear axle to provide the ideal 47/53 per cent front-rear weight distribution. The use of lightweight materials keeps the Gullwing's weight down to a relatively lithe 1620kg and fuel consumption down to 13.2 litres per 100km.