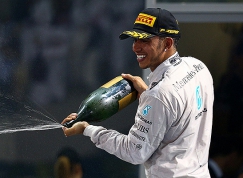 The 2008 champion became only the fourth Briton to win two world titles.

Hamilton, second in qualifying, took the lead at the start and controlled the race, as Mercedes team-mate and title rival Nico Rosberg suffered car trouble and finished 14th.
"This is the greatest day of my life," the 29 year-old said.

"2008 was a great year in my life. The feeling I have now is way, way past that. The greatest feeling ever."

Hamilton moves level with Britons Jim Clark and Graham Hill on two titles, and is one behind Sir Jackie Stewart.

He joins a number of other drivers on two titles, including his great contemporary rival Fernando Alonso. Michael Schumacher is the all-time record holder with seven, while the most successful current driver is Sebastian Vettel on four.

Rosberg, who started on pole, was left struggling by the failure of his hybrid system. With two laps to go, he was told to retire by his engineers at Mercedes but said: "I would like to go to the end."

As Hamilton crossed the line, Prince Harry, attending the race, took to the team radio to say: "Lewis, well done for not making the British public sweat. You are an absolute legend."

Hamilton stood on his car to celebrate after he returned to the pits and then went over to embrace girlfriend Nicole Scherzinger and his family, who had flown in for the race day to support him.