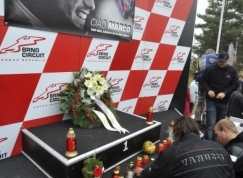 
IT was a black day for motor racing in Sepang,Malaysia on Sunday,23rd of October. Rising superstar Marco Simoncelli riding for San Carlo Honda was involved in an accident which took his life at 24 years of age.

Nowadays circuits have major protection to avoid injury in accidents with runoffs and gravel traps etc. to make the sport as safe as possible. But in motor racing, being a somewhat dangerous activity, there are always certain unpredictable situations that can result in tragedy.

At the start of the Malaysian Grand Prix, two laps into the race, Simoncelli had been pursuing Spaniard Alvaro Bautista’s Suzuki when he lost grip at the front of his bike on a fast right hand corner.Against all the odds, the bike, as opposed to sliding left in to a safe area, got tyre grip again and curved right back into chasing traffic.With no time to react, Colin Edwards of Monster Tech 3 and Valentino Rossi of Ducati collided with Simoncelli with such a force that Simoncelli’s helmet was knocked off in the impact.

The race was immediately red flagged and eventually cancelled after the official news from Dorna management was that Marco Simoncelli had been transported by ambulance to the circuit medical center where the medical staff worked to resuscitate him. Sadly Simoncelli succumbed to his injuries at 4:56pmMalaysian local time. Rossi managed to ride back to the pits but Edwards, after dislocating his shoulder in the crash, sat on the grass taking in the shock and horror of the aftermath of the incident.

Marco Simoncelli started GP racing on 125cc’s in 2002 at the age of 15. Since then Simoncelli has been a joy to watch for many fans. In 2008 he was crowned 250cc world champion with 12 podiums from the 16 rounds. By 2010 Simoncelli was promoted to the senior class with San Carlos Honda and it was from here, sometimes with controversy, that he began to shine.

This Happy enthusiastic young rider will be missed both in the paddock and on the track in the future. Condolences go to Marco Simoncelli’s family, team mates, friends and the fans that knew him.The last race of MotoGP series moves back to the Spanish Peninsula at Ricardo Tormo circuit, Valencia in two weeks, with the 125cc and Moto2 championships still to be decided.