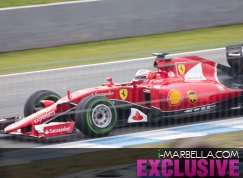 Jerez has returned to the stage, introducing us some of the new cars for the upcoming season.

It is too early to make a major analysis, but apparently the Mercedes team is in top form, and the Ferrari team is listed as the fastest, with Kimi Räikkönen being the fastest (1:20,841).

Reliability remains in Mercedes, who has opted for a very conservative week regarding fuel loads. Still, the times were never different from Ferrari lisetd as one of the strongest team for the new season.

No serious structural problems, though no major improvement with either conventional or electric engine. Fernando Alonso spotted tweeting messages of optimism.

Toro Rosso, Mercedes, has been with the team for most of the test kilometres. The STR10 could be one of the revelations of the year if they continue the trend they have shown in the Andalusian track.

A somewhat gray day for Red Bull. Daniel Ricciardo lost time during an engine change. The purpose of testing is to collect data for understanding the car in general, and the power unit.

Kimi Räikkönen made a debut with the new SF15-T and left very happy, confirming that the new car feels much better.

Kimi was able to complete a total of 92 laps without problems, this the new SF15-T seems to have been improved as compared to 2014.

Aerodynamic tests with aerodynamic sensors have also been carried out.

Debut for Felipe Massa, who completed numerous laps, which have been used to study the different tire compounds available, accompanied by aerodynamic and different technical configurations.

Both drivers were very happy with the performance of the car, saying that the team will be stronger than last year.

Second day of testing for Enstone; the new power unit managed to make a total of 96 laps lead by Pastor Maldonado. Great news for the team that landed in Jerez last Saturday.

Lotus seems to have taken a step forward with the new Mercedes motorist who appears to be, for now, one step ahead of Renault in technical aspects.

Felipe Nasr finished the day being able to collect a handful of information about C34, which seems to be performing better at the moment.

However, a small glitch in the early morning delayed the team's plans.

The Brazilian driver used different tires under different track conditions. In the afternoon session, runs with most laps were done with no apparent problems.