Can Valencia afford to keep Formula One? 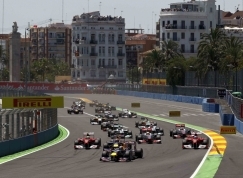 
A review of the grand events in the region is underway as budgets bite.

As the lack of liquidity is taking its toll on the Valencia Regional Government, we have seen President, Albert Fabra, increasing regional income tax as a result. Previous budgets are being slashed there is now debate about the Formula 1 race.

Fabra distanced himself a month ago from the grand projects which were brought to the region by his predecessors, Eduardo Zaplana and Francisco Camps, and he has now said such events were under revision. He said they had turned out to be a fiasco and the citizens had realised the overspending which had taken place.

‘The grand events are not possible in the way that we have understood them until now’, he said.

He revealed that a letter has been sent to Bernie Ecclestone, President of Formula One. It appears there is no unilateral cancellation option in the contract and so agreement will have to be reached.

The Generalitat pays a 20.5 million € annual canon to Ecclestone, and the public regional TV, Canal 9, pays 4.4 million € a year to broadcast the race. The urban circuit built for the race in Valencia cost some 100 million €.