Marbella Number 1 on the World Stage 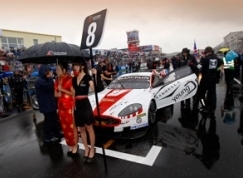 Young Driver AMR - with "Car Marbella" experienced success  in the opening race GT1 World Championship in Beijing. Stefan Mücke (GER) and Darren Turner (GBR) claimed their first win of the season in a thrilling race with his Young Driver Aston Martin DBR9 AMR-while Alex Müller (GER) and Tomas Enge (CZE) finished the qualifying race with a superb second place. With a dominant performance in China, Young Driver AMR is in an excellent position in the FIA World Championship GT1 ahead of the next race in Argentina.

Sponsored by Buddha Beach and La Sala, the car proudly wore the logo of Marbella before a crowd of 250,000 spectators in China,  a great promotion for the city in the growing Chinese market.