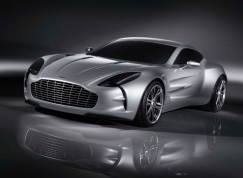 Exclusive Marbella dealership  C. de Salamanca car dealership has confirmed the sale of the most expensive car ever to be sold in Spain.

The ONE - 77 is  the latest model from legendary  British car maker, Aston Martin, which costs an eye watering 1.8 million € with tax.

The dealership has not named the purchaser, but has described him as a successful foreign businessman, middle aged, and a car fan. He spends a great deal of time in Marbella, and the dealer says has taken five months to decide on the purchase, paying a 400,000 € deposit.

The ONE-77 will be delivered in March next year. The client has been to the factory to request the personalisation’s of the vehicle which will come in a blue silver.

Aston Martin are to make only 77 cars of the model which boasts an engine with 12 cylinders and 760 horsepower.

One to watch out for around Puerto Banus!!!

gloriacorby 10-12-2010 16:35 Many congratulations to Victor for selling the most expensive car in Spainish history.
People are very interested in this car. May you sell many more.
0

Victor Kortscheff Pardo 22-11-2010 14:45 It is a fantastic looking Aston-Martin One-77
and it is great news for Marbella so the
people can see that Marbella is coming back
to where it was always and there is clients
in Marbella with potencial, but want to be
careful on their investment in real estate &
cars, I trust there will be another client
for the Aston-Martin One-77 for sure.
0