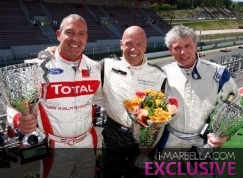 Saeko Hamada TV joined Klaas Zwart from Ascari Race Resort at the BOSS GP in Hockenheim, Germany, where team Ascari took 2nd place. But on the next race in Donnington Park, Klaas recorded a double win!

The Boss GP consists of 14 races in 7 countries:

Saeko Hamada TV followed Team Ascari on 16-17 April in Hockenheim, Germany. Team Ascari finished 2nd on the first race, driving a Benneton. "I am really happy about winning the trophy! The car felt really good and it was also  faster than the day before. Unfortunately the gearbox didn't last," said Zwart. Saeko filmed the preparations before the race, warming up the car and also the ceremony on the podium, where Klaas was given the trophy!

Have a look at the episode HERE!

The next race in Donington Park, England was very su ccessful for Klaas Zwart, because the experienced driver steered his Benetton Formula 1 to victory in both ra ces at the English circuit. Austrian driver Ingo Gerstl and Dutchman Henk de Boer both won one race each in the Formula-class. French rookie Didier Sirgue cruised to victory twice in the Masters-division.

For the 2009/10 season Klaas Zwart switched to the BOSS GP Championship, Big Open Single Seaters. This series is divided into 2 classes:

2) BOSS GP "Masters" class where you can find Formula 1 cars from before 1990, GP2 series, F3000 and world series Formula Renault and Nissan

A day at the Races, Mario Guarnieri puts the new Veritas RS III Through its paces at Ascari Race Resort (2)

The Ascari Vision, one man’s passion… (1)