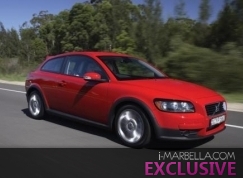 Volvo, that heretofore boxy but good brand, has evolved into something of a rarity. It has conspired to produce a hot hatch that mixes it with the best of the segment. Ordinarily, as soon as I had uttered those words, hot hatch and Volvo, in the same sentence, most people would get an odd glazed look about them and tune out from any of my further commentary. But not any more.

Beauty, is in the eye of the beholder. And the C30 T5 is a beauty to behold. It isn’t that it is much different to the previous iterations, only the headlights have changed shape really, but it somehow seems to have gained some brand cache. That is, until you look at it from behind and see its sagging nappy rear end. But, aside from that, it is a looker, not at all what you would expect from the Swedes. And that is a good thing. The VW and Audi brands are de rigueur when it comes to performance hatches, and that can be seen by the sheer volume of these on our roads.

By choosing the Volvo, you would be saying that you are a little different to the usual boy racer, that your style is more individual and eccentric, but not at the expense of performance.

The performance is where the Volvo surprises. Point it in a straight line and you will be doing 100km/h in a mere 7.1s. The new five pot 2.5 litre turbocharged motor has the requisite growl as you up the revs, and it is once again a surprisingly melodious refrain. Power is transferred to motion through the large diameter, low profile tyres and all the usual electronic intervention suspects are there to keep it neat and tidy.

The handling has had a major overhaul and the steering is a lot more direct. The suspension is naturally a lot firmer and the chassis is superb. It did feel slightly skittish over some of the rougher roads, but not bad enough to deter the target market from buying it. After all, having a suspension that jiggles the kidneys a bit is all part of the hot hatch experience.

On the twisty bits, it has a good, planted feel that inspires confidence and a desire to go that little bit quicker. It is a solid performer and would take some experienced, hard driving to exploit it to its full potential. The trouble comes in when you realise that this potential is going to be exploited to the very limits by some people not really qualified to take it there. The car will have spades of ability left long after the talents of most of the drivers’ have run dry.

Inside the car, it is also a little different and individualistic. The floating hang down, while initially a bit odd, grew on me as I spent more time with the car.  The controls were a bit foreign to me, but easily figured out. When first holding the steering wheel, it felt too big, but it soon became familiar and comforting to hang on to.

Seats are extremely comfortable and cosseted my relatively large frame well. Driving position was, as to be expected, easily adjusted and easy to find the optimum. What seems to be a consistent gripe of mine lately is that I felt it could have benefited form electric adjustments. But, if that means making the seats any bigger, I would advise against it. Rear space is extremely limited so make sure that all your friends are very short. Or four years old.

Boot space, is nonexistent and the silly little shelf that is there would soon be straining at the seams after dropping a few groceries on it. Not a car for a family with young children. You would have to leave them behind to fit all the gear needed to keep them fed, watered and secured. Try and drop a pram into the mix and you are stuck.