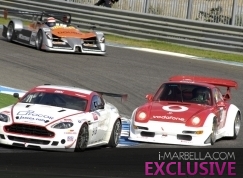 
The RSV Motorsport team enjoyed a fantastic result in Portugal

RSV Motorsport enjoyed their best result of the season at Portuguesee GT Championship held in Estoril this weekend. Ronald Severin and Ni Amorim achieved both wins in the GT4 category in their Aston Martin N24, the second one in a strong downpour. Every year Estoril is becoming one of the most popular circuits for RSV Motorsport, as they have proved this weekend. They had a good start. Ni Amorim took pole position in the GT4 category with a total 6th position thanks to a great time - 1'48.864

In the afternoon, both the Portuguese driver and his team mate completed abrilliant performance. After a good first stint by Amorim, Ronald Severin took the wheel leading the GT4 category cars, a position he fought hard to defend until the chequered flag.

After a quiet Saturday a Sunday saw black clouds on the horizon  which quickly turned into a strong downpour flooding the track. Despite the aquaplaning, Severin did not make a single mistake during his stint and gave Amorim the wheel, who brought the race to a memorable end. The hard weather conditions helped to balance the features of the cars. Amorim kept leading the GT4 cars with no problems and he fought for the podium In the end RSV finished fourth and first in their category. After the double win in Estoril, RSV Motorsport is already working on the Aston Martin for Jerez where the last meeting of the Spanish GT Championship season will take place on October 16 -17.