Barrichello rolls back the years in Jerez 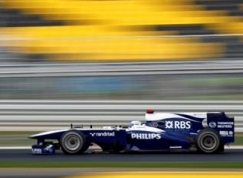 
Brazilian veteran Rubens Barrichello lapped fastest for Williams on the final day of the second pre-season Formula One test at the Jerez circuit.

After a troubled first few days for the British team, Williams enjoyed a far more positive day in southern Spain, with Barrichello doing 103 laps and with a best time of one minute 19.832 seconds.

"Nothing was going to stop us from doing over 100 laps today," said technical director Sam Michael.

"We did suffer from a hydraulic leak during the middle of the day but overall it's encouraging that we've had no major fundamental failures on the car - especially considering how tight the package is.

"All of the faults that have been causing our downtime in the recent days are small things that systems will quickly put right."

Japanese driver Kamui Kobayashi was second fastest for Sauber and Spaniard Fernando Alonso third, with 115 laps under his belt, in the new Ferrari.

Brazilian reserve Bruno Senna had his first taste of the Lotus-backed Renault and was fifth on the timesheets after Germany's Nick Heidfeld had tested on Saturday with the fastest time.

Heidfeld is expected to get the nod to stand-in for Poland's injured Robert Kubica, who could be out for the whole season after suffering serious injuries in a rally crash, at Renault alongside Russian Vitaly Petrov.

"I'm pleased with how things went," said Senna, nephew of the late triple champion Ayrton, in a team statement.

"It was very much a learning day for me. I had never used the adjustable wing or the KERS before, so I had to adapt to these.

"It's not easy at first, because there is a big workload and you are operating two factors that change the balance of the car, but by the end of the day it became more like second nature," he added.

McLaren had a frustrating day with Jenson Button, the 2009 champion, unable to find a good balance with the car. A component failure then called a halt to proceedings in the afternoon.

Two more tests remain before the start of the season in Bahrain on March 13.