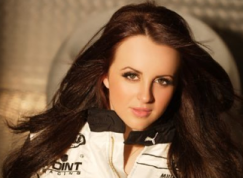 
Laura Tillett, one of the hottest young prospects in UK motorsport, will make her car racing debut in the Protyre Formula Renault BARC Championship this year.

Having chosen to pursue a career path in single-seaters – with the ultimate goal of climbing the ladder all the way to Formula One. West Malling-based Laura, unquestionably one of the world’s top young female racers, has agreed a deal with renowned squad Fortec Motorsports to contest the ultra-competitive championship with a view to also driving in the three-event Renault GP Cup later in the year.

Off the back of an encouraging test in a Total Control Racing-run ‘tin top’ Renault Clio Cup car at Brands Hatch in January, the 20-year-old returned to the 1.2-mile Kent track last week to sample an FR 2.0 single-seater for the first time with Fortec. Impressing the team with her immediate pace and ability, Laura tested again at Silverstone last Friday, 24th February, before finalising her 2012 deal.

“I’m really, really excited to have signed for Fortec in Formula Renault BARC”, said the ecstatic Kent racer, “This is what I’ve wanted to do since I was little when I started out in karting, it feels like a dream come true and I couldn’t have hoped to be with a better team. I absolutely love the car, it’s really good to drive and my confidence grew massively over the two test days.”