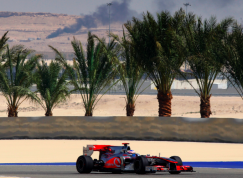 Bahrain's Formula One organizers insist that the Gulf state's grand prix race will go ahead as planned in April, despite recent fears that its political situation has not improved.

A group of British peers appealed for the race to be called off in an open letter to The Times newspaper last week, saying that the same problems of social instability prevail as when last year's event was called off. However, a spokesman for the Bahrain International Circuit (BIC) insisted on Tuesday -- the anniversary of the "Day of Rage" protests against the ruling monarchy -- that the April 22 event will take place.

"The calendar was confirmed for 2012 at the end of last year and Bahrain has a place on that calendar," the spokesman told CNN under condition of anonymity. He said motorsport's governing body, the Federation Internationale de l'Automobile (FIA), had been in regular contact with the BIC. "We are entirely confident that the race can be and will be an excellent event. The FIA has been taking the situation seriously for a long time," he said. "Jean Todt (FIA president) has been visiting Bahrain himself, keeping in constant contact. The FIA has said that there is no reason why the grand prix should not go ahead."

The spokesman said although there had been continuing problems in Bahrain over the past 12 months, the riots in the main city of Manama were smaller than those which took place in Britain's capital London last August. "When I was out there two or three weeks ago it was very quiet ... There is no doubt that there have been some protests," he said. "There's no doubt that there have been some small riots, nothing like on the scale that we saw in London. There have been some public order disturbances, but on the kind of scale that Britain has endured many times."

Bahrain is scheduled to be the fourth race in the 2012 F1 season, which starts on March 18 with the Australian Grand Prix in Melbourne. The spokesman said the BIC is "absolutely confident" that the Bahrain circuit will be safe for the drivers and teams. "When it comes to being in and around the track, the drivers and the teams will be extremely safe. Absolutely, totally confident about that."