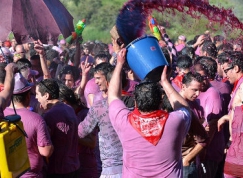 Made any plans for June? Here is a round-up of some of the best events in Spain, from a wine throwing battle in La Rioja to a high speed air race in Lleida.

To celebrate the 150th anniversary of the birth of Irish poet, William Butler Yeats, the month of June will see the Yeats Society Madrid organise a series of cultural events across the Spanish capital in close collaboration with the Embassy of Ireland.

This exhibition brings together sixty fashion photographs inspired by painting. The photographs, from the Vogue Archive, are the work of great photographers over the past three decades.

One of the oldest and most important religious festivals in Toledo mixes singing, aromatic smells and spiritual devoutness in a spectacular solemn procession. Corpus Christi is celebrated all around Spain so you might also want to check out what's going on where you live.

This festival in Barcelona is for music lovers looking for new progressive sounds from international artists of the electronic music scene. The festival has a wide range of activities, DJ sessions, concerts, and multimedia art exhibitions.

Madrid’s festival of all things urban includes concerts by some of the world’s hippest DJs, a skate park, tattoo convention, fake beach and street food. Glasgow producer/DJ Hudson Mohawke and Belgian brothers 2ManyDJs are just two of the big draws to this year’s festival. A ticket for the Friday and Saturday, including entrance to concerts is €35.

Held annually in Córdoba's Botanical Gardens since 2002, this event is designed to promote deeper understanding of the traditions of Sephardic culture, inluding music, talks and typical dishes.

By far the largest gay parade in Spain and with around two million people taking to the streets, one of the biggest pride events in the world. The Madrid Orgullo has become one of the main fiesta's of the capital with activities are centred around Chueca.

If you love carpets and er sawdust, then this unique celebration is just the event for you. Teams in the town of Elche de la Sierra compete to create the most vibrant crapet designs out of wood shavings over the Corpus Christi weekend. There is also a music festival, dancing and of course drinking in this beautiful seating in the Sierra del Segura mountain range near Albacete.

A town in the province of La Rioja hosts a festival to celebrate the feast of San Pedro. After mass a peaceful battle begins where litres and litres of wines are thrown on participants on either side of the battle.

A great fun spectator sport which might leave you with a crick in the neck, Air Race 1 is the first international title in the sport of formula one air racing, when eight airplanes race around simultaneously on a circuit at speeds of up to 450kph.