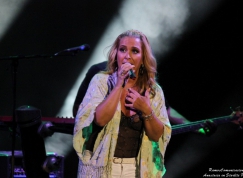 
Anastacia performed at Starlite 2015 in Marbella, a home to the biggest names in the music industry.

Anastacia Lyn Newkirk (born September 17, 1968) is an American singer, songwriter, and producer. Her debut record Not That Kind, released in 2000, was an international commercial success, particularly in Europe as well as Australia, where the lead single I'm Outta Love became the biggest selling song of the year. The singer was awarded as World's Best-Selling New Female Pop Artist in 2001. Her commercial success continued with 2001's Freak of Nature, which reached No. 1 in eight countries and included the international chart topper Paid My Dues.

After successfully recovering from cancer, she returned with 2004's Anastacia, which deviated from previous albums into pop-rock. The album peaked at No. 1 in 11 countries, became the second biggest selling album of the year in Europe and produced Left Outside Alone that remained at No. 1 on the European Billboard chart for 15 weeks. In 2005, the multi-platinum compilation project Pieces of a Dream was released which spawned Anastacia's chart topping duet with Eros Ramazzotti, I Belong to You (Il Ritmo della Passione). The singer would go on to become one of the top selling international female pop-singers of the 2000s before taking a hiatus in late 2006. Anastacia has been recognised for worldwide sales of over 30 million albums. She has also topped the U.S. dance chart on two separate occasions.

In 2014, Anastacia made a comeback with her sixth studio album Resurrection, which reached the top ten in the Italian, Netherlands, Switzerland, German, and the UK charts, as well as Top 20 in Austrian, Irish, Portuguese, and Spanish Charts.

Known for her powerful mezzo voice and her small stature of 5 feet 2 inches (157 cm), she has been dubbed "the little lady with the big voice". Anastacia is also known for her trademark glasses; although she underwent laser surgery in August 2005, she frequently still wears them.