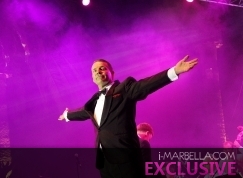 
Once a salesman, the Englishman Stephen Triffitt is now known to the world as the new Frank Sinatra - he looks and talks like him and most importantly sings like the legend himself! i-Marbella spent ten minutes with the talent to find out more about him!

As Frank would say...”Well my body maybe 49, but inside i’m 28! And I would further like to say that I would be 21 if it wasn’t for all those years drinking with Joe E. Lewis!”

1. How did you get involved with music?

By mistake! A few years ago, I was a Time Share salesman in Tenerife and a friend of mine had opened a Karaoke bar in, so to support him I went along one night. I got very drunk, and for the first time in my life sang ‘New York, New York. People all around said that it sounded so much like Frank Sinatra!!

My father was in the Royal Air  Force so I went to a number of schools all over the world, I think I went to about 13 schools!

3. When did you realise you wanted to be a performer? Who discovered you as Frank Sinatra?

When I came back from Tenerife I tried being a salesman for a while, but didn't really enjoy it. At the time I was married and so decided to become a house husband. Because in Tenerife, people had said I had a voice, I decided to make some beer money by singing in local pubs and clubs.  I used to sing a variety of different songs by different performers, such as Billy Joel, Elton John, Neil Diamond and just one or two by Frank Sinatra. The problem was that everything I sang people said sounded like Frank Sinatra singing it! So I started to concentrate on the Frank Sinatra standards.

At about the same time, I had applied to appear on the UK TV programme 'Stars In Their Eyes', where people would impersonate singers. I appeared as Frank Sinatra and won my heat but lost the final to Freddie Mercury! (How can you compare the two?)

As a result of appearing on that program, I was asked to sing on stage at the Riverside Studios in London before and after a Chaucer play called ‘No Way Out’. Because the play is basically about 4 people consigned to Hell, and finding that Hell is being stuck for eternity with other people, the song i sang at the opening was ‘Cheek to cheek’, the opening line of which is ‘heaven, I'm in heaven’. After the play I would sing in the theatre bar for about half an hour. One of the characters was being played by Bob Geldof’s partner Jeanne Marine, and so Bob came to support her.

OK magazine took a picture of the both of us, which was seen by an American Director who was putting on a new musical ‘The Main Event’. The life story of Frank Sinatra in the songs he sang. He asked to meet with me, flew to London, we met, and a week later told me I had the part of Frank, and we were opening in the Sands Hotel/Casino in Atlantic City!

4. Do you have any other similarities with Frank besides the voice and appearance?

I enjoy a drink or two, but I don't like Jack Daniels! I smoke, but smoke the lightest cigarettes I can find, not Marlboro Reds as Frank did. As for the women........that would be telling!

As a child I used to listen to Frank Sinatra alot, my own choice, nothing to do with my parents (they liked folk music!) I suppose, like most, as I sang along I would emulate the style and the breathing. I just never realised that it would be sitting there at the back of my brain somewhere just waiting to be used! So I guess you could say it was Frank Sinatra that toaght me how to sing, breath, and put meaning into a song.

6. Where and when was your biggest concert? What do you consider to be your greatest achievement so far?

If you include TV, i suppose the biggest audience would be about 22 million! But live would be 15,000 at a live performance of my solo show ‘Stephen Triffitt celebrates Sinatra’. It was at Kenilworth Summer Concerts, and Jools Holland had been there the day before.

The greatest achievement so far is to be recognised as the best in the World at what I do! A lot of singers say they are the best! Thankfully it others that say I am! It makes the job harder trying to stay there, knowing that at any time there could be another waiting to take over!

My greatest achievement would be to have met Tina Sinatra! She came back stage after a show and said ‘Hi, i’m Tina. Your daughter!’ She loved the show and what I did. And said it brought back some very fond memories.

7. What are your dreams and ambitions?

I would like to continue as long as Frank did!  My dream would be to be recognised as my own voice and not Frank, but that will never happen as long as people say I sound like him. So the best i can do is to continue the legacy.

8. Do you write your own music too? What are you working on at the moment?

I don't write songs myself, but I have come to know a couple of very good writers that write in the style Frank Sinatra used to sing. With them I am working on new songs that Frank might have sung if he was still alive and my age.

9. Does it sometimes bother you to be considered an imitation of Frank rather as a new artist?

The best description that has been given for what I do is an ‘homage’ to Frank Sinatra, rather than impersonator. I cant actually imagine doing anything else, nor do I want to.

10. What are your other passions? How do you spend your free time?

Most of my free time is spent on the river that flows by my back garden. I find getting on my boat and drifting very calming. I like gardening, but the heavy gardening, chopping trees, builing walls. Not planting pretty flowers im afraid!

11. What did you think about Marbella?

I loved my time there! The people are freindly, the sun is warm. I thought the audiences were fantastic! Can I come back now??