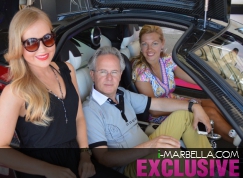 
Horacio Pagani is the founder and owner of Pagani Automobili S.p.A., which is an Italian manufacturer of sports cars and carbon fibre. The company was founded in 1992 and is based in San Cesario sul Panaro, near Modena, Italy. Mr. Pagani visited Marbella during the Marbella Luxury Weekend and presented his latest creationg - Pagani Huayra. A car that will cost you 1.24 million euros.

Horacio Pagani, who formerly managed Lamborghini's composites, founded Pagani Composite Research in 1988. This new company worked with Lamborghini on numerous projects, including the restyling of the 25th Anniversary Countach, the Lamborghini LM002, the P140 design concept, and the Diablo. In the late 1980s, Pagani began designing his own car, then referred to as the "C8 Project". Pagani planned to rename the C8 the "Fangio F1" to honour his friend, the five-time Argentinian Formula One champion Juan Manuel Fangio.

In 1991 Pagani established Modena Design to meet the increasing demand for his design, engineering, and prototyping services. In 1992, he began construction of a Fangio F1 prototype, and by 1993, the car was being tested at the Dallara wind tunnel with positive results. In 1994, Mercedes-Benz agreed to supply Pagani with V12 engines. The cost of these cars are at a total of 2.3 million dollars.

The final car was named the Zonda C12; the Fangio F1 name was dropped out of respect for Fangio, who died in 1995. It was first presented at the 1999 Geneva Motor Show.

In 2005, Pagani announced that it planned to triple its production output within the next three years, and to enter the US market in 2007. On 26 July 2010, Pagani claimed a new record for production based cars using the Pagani Zonda R and completing the Nürburgring in 6:47, beating the Ferrari 599XX.

The Pagani Huayra was officially debuted online with many pictures in a press release on January 25, 2011. The official world debut was at the Geneva Auto Salon 2011 in March. It is the successor to the Pagani Zonda. It is named Huayra after the Incan god of wind. Pagani expects to build no more than 40 each year and each will sell for £1,000,000. The engine is a M158 twin-turbo 6.0 Litre V12 from Mercedes' AMG division producing 720 horsepower (537 kW)and 1,000 N·m (740 lb·ft) of torque.The Huayra's main body is made from carbontanium (a mix of carbon fiber and titanium, also very light). The Huayra has been redesigned from the ground up, but shares many visual qualities with the outgoing Zonda. The top speed has gone up from the 220 mph (350 km/h) ( set by the Zonda F Roadster ) to 235 mph (378 km/h), and the 0–100 km/h time is 3.2 seconds. When the car was driven round the Top Gear test track by The Stig it set a lap time of 1:13.8, making it the fastest road car round the track.

How have the Pagani super cars changed over the years? And the brand?

It has been 14 years, since I created Zonda and it still has a very good value, even more than double now! The new model Huayra is a totally new concept of a car and we have been selling it around the world.

How many cars have you sold in total?

In total around 180 cars, so its a very exclusive car. Pagani cars are like haute couture in fashion, each client gets a personalised car. And usually our clients buy more than one Pagani. One client has already 7 Paganis. And the first 35 Huayras went to existing Pagani clients. And also the value of the car goes up with years since they is a very limited amount of them.

In which country you sell the most?

The best market for Pagani is Hong Kong, because that city is a bit like Chinese Monte Carlo. The taxes are low there to start with. I have sold more than 30 Pagani cars in Hong Kong.

Do you also have women as clients?

Yes, one client. She has a yellow Zonda. But actually the women participate quite a lot in the process of buying a Pagani. They help their husbands or men choose the interior, leather etc. Normally women don’t get involved in buying of other sport cars but when a man buys a Pagani they do.

Pagani Huayra is also in the new Transformers movie. How did the car ended up in that movie?

Actually they have been asking for it for 4 years now. But we are a small company, for example this year we produced only 40 Paganis, but other years we have produced only 15-18 Paganis only. And for a small company its expensive to give away one car for a month, it doesn’t make sense to us. But in the end  I did it and the villain is driving the car in the movie. The movie comes out in the end of June.

How many Huayras are you producing? And how much does it cost?

What do you think about the Marbella Luxury Weekend?

I really like the concept. I had a Pagani here two years ago, but I couldn’t come myself and last year I didn’t participate. But because of the crisis, you have to be positive and I think this is great demonstration of thinking positive and a show that if you have dream you can do anything. Just follow your dreams.

What other passions does he have?

I like designing, I am also making clothes now. I live a relatively simple life with my family. And I also love cycling for example.

What car do you drive every day?

I have a Pagani of course and I also drive a Porsche.

What are you working on now?

I cannot say, since it’s a secret. I am working always on something new.