Yanela Brooks new album 'Top Of Cuba' its about my Cuban roots where I composed, produced all songs 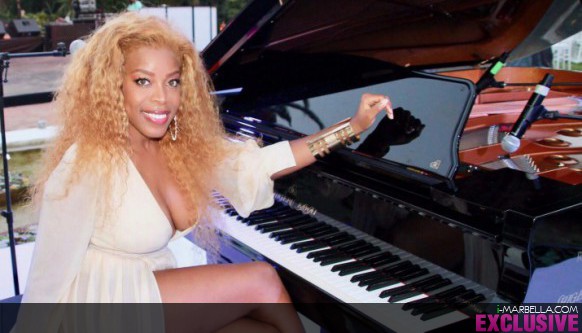 
The famous Cuban singer Yanela Brooks has honored us with an interview where she reveals intimate details such as her past life in Cuba, musical inspiration, concerts in Marbella and the work behind her new musical production ''Top Of Cuba''. July 23, 2019.

Yanela Books has recently been interview by us I-Marbella.com. We exclusively present the full interview with the Cuban singer and famous artist resident in Marbella, Costal del Sol where she let us know more details about the "Top of Cuba" musical project that was launched a few weeks ago.

The new album brings together the most significant and popular Cuban orchestras to display the sound traditions of the Caribbean island to every corner of the world.

This is as well one of the most important productions of all times in Cuba by our Diva Yanela Brooks.

1.What is all about your new album Yanela Brooks feat. "Top of Cuba"? What is album telling about?

THIS MUSICAL ALBUM IS ABOUT MY CUBAN ROOTS, WHERE I PRODUCED, COMPOSED THE SONGS lyrics and music, PARTICIPATED in the musical arrangements, particularly in the song with the national sinphonic, where I created every note you hear in the song and played all pianos keyboards , sang all backing vocals.


2.Who is performing in this album?

All songs have been composed in CUBA, Havana Is a very Special place to get inspiration, you flow like water, maybe because quality music and culture in general live in almost every street.


5.Pick a song and tell us about this song story, where does it comes from? who was involved, etc?

Some songs come from my personal experience and others I get inspired from some close friends, in general this Album talks about life.


6.What is the secret of your so powerful positive good energy?

To apreciate every second of my life ,I know that I'm a privilege person in this world and I apreciate a lot trying to give the best part of myself to the world, I need to share with gratitud with people all I have learn, and being so thankful for doing what I love during all my life since I was a child, what I love is music, art, and that's what I have done for 30 years, as I started my career at 7 years old at national school of músic in Havana, Cuba. Where I first learnt piano, orquestra direction, choir director and School of singers.

7.Tell us about your life in Cuba @Habana?

Constantly creating with my colleagues. Constantly in touch with art activities because Cuba is a potential country of art, everybody knows that, Cuba breaths ART, and art in the air

Yes of course, even if now my career has grown out of marbella, becoming much more international. I always have a space for my audience in marbella, they were so loyal to me and they deserve my attention as well.
I do so many private events during the year when I am in town, and specifically 19th July I will offer a very special concert #THEYANELABROOKsshowat 35th anniversary of Rotary Club Marbella International Summer Gala.

9. Please Tell Our Readers More About Yourself

I was born into a family of musicians in Guantánamo, Cuba. I moved to Havana when I was one year old but never lose my guantanameran roots because my mum insisted that I keep my authentic me. I started studying sport ( gymnastics) but after that, I preferred to start in the conservatory of music to develop all creative world. My mum was very focus on what I was good since I was a child and she discovered that music was my way, I was always singing and dancing since a was a child and all my teacher told her that I had the talent to be a musician.

I started traveling all over the world with my first orchestra Yanela y las chicas del Sabor at my 15 and then I decided to continue my solo career at 22, now I can say that this decision was very important for my life and for who I am today. I participated in movies (Tanger film) as an actress and as a composer of the music of the film.

I traveled all over Europe with musical BOLERO with Los Panchos ( Rafael Basurto as the principal actress. I moved to Marbella in 2006, started playing at Marvellous piano bar and I was there like 10 months then all big companies around the costa del sol contracted me for the most important events in the area, Marbella Club, Puente Romano, don Carlos the casino, KEMPINSKI where I had the opportunity to be their exclusive Star for 3 years.

In the middle came to The Voice program first edition in Spain that was amazing, I was the first Latin person who had the opportunity to participate in that kind of program in Spain and this gave me the possibility to be recognized in too many countries for the big audience. After that Alejandro Sanz and Pepe Barroso edited a successful album where I became number one in 40 principales radio with my song Mondays and Mi Gente Arriba touring Europe for 2 years and a half for more than 20.000 people per concert, that was incredible.

After that I created my own music company in USA and I edited my album BOLEROS Nostalgia y Algo más where I payed tribute to Celia Cruz , Olga Guillot, and where participated top artist like Buena vista social club and Jon Secada, with song ''Cubanos por el mundo'' I signed a contract with Hard Rock Cafe trough Bravo records company, with Lvmh worldwide with who I continue colaborating since 2015 till today.
In fact this year we have again  the winter tour in Asia with the Yanela brooks show.
At the same time I will release my new show in Cuba and Latinoamérica with THE YANELA BROOKS SHOW AND #Yanelabrooksfeattopofcuba now on the popular places on Amazon, iTunes, Google Play music and all musical platforms.
Soon I will release the documentary of how I created the TOP OF CUBA project, and then a film about the great stars , masters  who have been participated in this successful album. How we record every song , how hard we work to get now an historic album about authentic Cuban music, like song , cha cha cha, changui, songo, salsa, timba , and sinphonic and classical music.

By: interviewed by Annika Urm