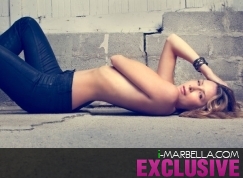 
An actress and international model Summer Crosley is originally from Los Angeles, but now with her huge success she is residing between LA, Miami and Spain! She is most famous for her role on the TV Series Californication as David Duchovney's girlfriend. Besides acting she is also an international model and has graced the pages of world famous magazines like GQ India, GQ South Africa, GQ Australia, Vogue Italy, Miami Magazine, Elle, FHM, Esquire, Cosmopolitan, to name a few. When Summer is not modeling she is involved in a Ocean Conservation Program to help protect oceans and raise awarness to stop trash and pollution on the beaches!

1. Where were you educated?

2. How did you get into acting? How long did it take you to get a role in a famous TV series like Californication?

You know I never even pursued acting, I was actually approached by a model agency who then booked me on Californication, and from there everything took off.

3. With who would you like to work with? Or which roles are your favourites?

I would love to work with Leonardo Dicaprio, he is so talented..

4. How has it been working with such big actors like David Duchovny?And doing a sex scene with him?

I was actually nervous at first especially it being a sex scene, but after i relaized everyone was super professional I ended up really feeling welcome.

5. What does it take to make it to the top? What is the secret of your success?

It takes a lot of confidence and beleiving in yourself, there is a lot of competition out there so you have to be confident and secure.

6. Many people claim Hollywood is very superficial. What do you think?

It is in a way, there are some people who only care about themselves when it comes to the acting biz, but if you are only going to go around caring about yourself you will get nowhere with it......You have to be a good person inside and out and consider other people to really get somewhere.

7. What is your biggest accomplishment?

The Tv series Californication of course:)

8. What are your dreams and ambitions? Do you prefer acting to modelling or vice versa?

I love both!  My dream is to have a family one day somewhere by an exotic beach.

9. What are your passions in life?

To be more involved in ocean conservation and to help educate people on how inportant it is to be part of beach clean ups to stop trash adn pollutionon our beaches.

10. You are also involved with charity, what triggered you to work on that?

Ocean conservation is where I focus a lot of my time, I got involved through my travels as a model, I would go to excotic beach destinations and see how the beach was polluted so decided to take a stance.

11. What are you working on at the moment?

13. Have you ever been to Marbella or are you planning on coming this summer? What do you like in Marbella, or what do you usually do?

Yes I love marbella and have been there often, i love the beach, shopping and dining!  gorgeous!