Interview with Peet Rothwell about Me and Mr. Buble 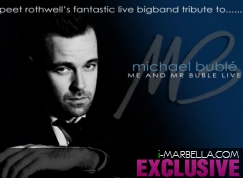 Peet Rothwell, originally from North Wales, has been singing since he was just three years old, and now you can easily mistake for Michael Bublé! Peet has quickly become one of the most accurate Michael Buble tributes in Europe and regularly performs for the rich and famous on many continents. He will also perform in the World Vision Gala on the 23rd May in Hotel Puente Romano.

Peet Rothwell’s vocal style and charisma supersedes what you would expect from a top tribute to the most celebrated corner of our time. His show incorporates all of Buble’s songs old and new including “Me and Mrs Jones”, “Cry Me A River”, “ Home” and “Haven’t Met You Yet” plus many more. i-Marbella brings you the interview with the talented man.

1. When and how did you start singing?

I started singing around 3 and a half years ago for a change of career, I used to run and design bars and nightclubs and this brought me to Spain after working in the trade for a couple of years I decided its time for a change! With there being a lot of ex pats in the area i lived I decided to buy a nice suit and start singing standards and classics and see where it would take me.

I grew up in North wales and after high school attended college studying performing arts.

3. How did you end up in Marbella?

I used to holiday here a couple of times a year and on one trip me and my then girlfriend decided to come and spend 6 months here, this will now be my 7th year living on the coast!

4. Why did you start singing tribute to Michael Bublé? Did you discover the resemblance or somebody else?

Bublé was kind of the natural progression, as I was getting ready to perform my standards and swing show as I was searching for material and music I stumbled across Bublé on the internet, it was all there ready and this Canadian dude just made my job a lot easier lol. It was a while before I decided to attempt a tribute to him, my brother in law in the UK is a top Robbie Williams Tribute and suggested i should contact the agencies, at the time it sounded ridiculous because I couldnt actually sing too well and I sounded nothing like him.But i thought what the hell and practiced and studied him and perhaps he can take the credit for teaching me how to sing lol.

5. If you’re not singing Michael Bublé’s songs, what kind of repertoire do you have?

Obviously Michael Bublé is a big part of my life and i spend a hell of a lot of time singing and acting like him, so sometimes i like to mix it up for a change, especially when I’m here on the coast I get to sing other classics from people like Sinatra, Nat King Cole, Harry Connick Jr as well as Jamie Cullum. I love singing his songs. I’ve been known to throw the odd pop song in there as well.

6. What do you consider to be your biggest accomplishment as a singer so far?  What do you still dream of?

My biggest accomplishment so far is to do what I promised myself and create a big band theatre tribute and perform in my hometown theatre, I was so fortunate that myself and D&co live could put together this fantastic show and I got to take it home last May, was one of the best nights of my life and its something were looking forward to more of in the near future!!! The sky is the limit, there is so much more to come!

7. How much are you involved with charity events? How important is it to you?

I have been fortunate to be a part of some fantastic charity events both here and the UK! Some are obviously  more important personally than others but its always a great feeling to be able to do what you do for a good cause! Im privileged to be asked to perform for such a great event and hopefully I can help to make it a huge success!

8. How do you spend your free time in Marbella?

My free time is mostly spent tin the gym training and in the kitchen, i live half way up a mountain so its really nice to be able to escape and hibernate, then if i need a bit of excitement its just down the hill

9. What can people expect from your Performance in World Vision Gala 23 May?

As far as what to expect from me, well it"s a fantastic event at a prestigious venue so I will be there to do my thing, hopefully I'll be on form and the evening will go off with a bang. Looking forward to it!

10. What are you plans for the summer?

Summer is such a busy time for any performer but i intend to take this year steady, i will be travelling a lot and in between i will be preparing and training to enter the UK body building championships next year and also studying to become a personal trainer, but as long as i get to throw on my shiny shoes and step on stage I'll be happy.