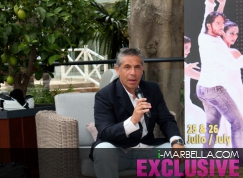 Pancho Campo is a former tennis professional who is an expert in organizing events in sports, music, wine and the environment. He is currently the CEO of Chrand Management and the Honorary President for The Wine Academy of Spain.

Pancho Campo (born Francisco Armando Campo Carrasco, September 13, 1961, in Santiago, Chile) is a Spanish event organiser, and was from 2008 until May 2012 accredited with the title of Master of Wine. He was the first Spaniard to pass all the exams of the Master of Wine certification,and has conducted seminars and wine tastings with wine experts in more than 20 countries. Campo resigned from the institute of the Masters of Wine on May 3, 2012, informing of his move away from wine and into more sports and music events.

Today, Campo is the President of Chrand Management, which organizes and markets of sporting, musical, gastronomical and environmental events. The company has organized concerts with artists including Sting, Pink Floyd, UB40, Enrique Iglesias and Tom Jones.In sport, Chrand has organized the Davis Cup, the Indoor Trial World Cup, the Pro Beach Soccer Tour and tournaments with Andre Agassi, Stefan Edberg and Pat Cash.  It has also organized conferences with speakers such as Al Gore, Kofi Annan, Juan Verde and Francis Ford Coppola. And now he is organising the concerts of  Joaquin Cortes in Marbella, on the 25 and 26th of July in Puente Romano Tennis Club.

1. Why did you choose to bring Joaquin Cortes and not another artist?

I have known Joaquín for quite some time and I have organized 3 shows with him in Marbella and Dubai. He phoned me earlier this year and told me about his new show Gitano. We discussed the idea of working together again and we both thought that it was a good idea to present this new show in Marbella. Three months later here we are, ready for action.

2. Can you explain what the preshow cocktail offers?

We want to treat the spectators that hold Diamond tickets and who have purchased a box to a real Spanish experience and hospitality. This is why they are entitled to attend a pre-show cocktail where they can choose between Sherry, white, red and rose wines, as well as cava. Also, they can taste some nice Spanish Iberico ham. This is the best way to start an evening that promises to be unforgettable.

3. What about the after show party?

Also, for guests holding Diamond tickets and Boxes, if they want to continue the evening having some drinks and fun, we have organized an after show party. On Saturday the 26th we have joined forces with La Sala Banús to welcome those spectators interested in partying the night away. Joaquin and his group of artists will also attend this after show party.

4. What made you decide to do 2 consecutive nights with the same artist?

We are convinced that there is tremendous interest in seeing Joaquin Cortes live on stage because he has not performed in almost 5 years. Also, because he is considered as one of the top 10 dancers in history and his new show promises to be amazing. I remember back in 2001 I took a similar decision with Sting in Dubai. It was the first time that an artists of his calibre was doing 2 shows back to back. It worked and we sold out, almost 15,000 tickets. I have the same feeling this time with Joaquin, that we will sell both nights extremely well.

5. Joaquin Cortes concert coincides with several famous shows in Marbella? Too much competition don't you agree?

The Costa del Sol has recovered much better than any other region from the recession and more tourists are coming to the region this summer. A lot of very wealthy visitors that like quality entertainment and Marbella will be nothing but short of it. Keep in mind that the venues are quite small around here and over 1 million visitor from Malaga to Sotogrande that can buy tickets for all the shows on offer.

6. What other concerts and events are you planning for the rest if the year or 2015?

We are collaborating with Planet Project Events in the promotion and production of the Tropical Fiesta at Puente Romano on August 23rd, featuring Kid Creole & The Coconuts with Chico Castillo and the Gipsies as the opening act. It should be a really fun gig to finish the summer season of concerts. We are negotiating with other artists and events for the winter and summer 2015.

7. Is marbella an ideal city for all types of concerts?

The biggest advantage that Marbella has is that people are willing to go out and attend shows, paying ticket prices that are quite high compared to other cities in Spain. Also, is a very cosmopolitan crowd that can enjoy and be interested in all sort of styles of music and performers.

8. To which other Spanish city would you take Joaquin Cortes and guarantee a sell out?

Joaquin is such a great artists and his new production so impressive that is not difficult to have success in many cities of Spain and the rest of the world.  We are in negotiations and working closely with him to try to arrange a large 2015 world tour. I would love to promote his show at the Royal Albert Hall because he has always been extremely successful there. Shanghai is also high in our list because of the tremendous interest by the Chinese people. However, a large show of Joaquin with other celebrities, at a large football stadium in Madrid would be fantastic.

9.The marketing and promotional campaign us massive and very impressive. What is being the result on sales?

Well, marketing is my background so a strong promotion was a must. Not only to sell lots of tickets but also to work on the image of Joaquin. There are many tourists that visit Marbella who are very interested in flamenco but there are not many quality options. Joaquin is the best ambassador of Flamenco and for someone that visits Spain is an incredible opportunity to watch a show such as Gitano, this is why we want everyone to be aware that this show is taking place in Marbella.

10. How us the Town Hall involved in this event?

The Town Hall has always been very supportive of our events because we bring culture and quality entertainment to the city. We brought Kofi Annan, Juan Verde, Innova and several music acts that help the city project an image of high profile events, not only in entertainment but also the economy, the environment, etc.

11. What do you expect out of those two days of shows?

Gitano is a 2-hour show in which the first part is dedicated to the flamenco roots of Joaquin. In the second part of the show he makes a fusion between flamenco and the different cultures and influences that he has learnt travelling around the world. This second part features Arabic, Latin and Indian influences. It is probably the biggest production ever to come to Puente Romano. In fact we have to adapt the stage to fit the Tennis Stadium because of its huge size. There will be over 30 people on stage including 17 musicians, 8 dancers, 2 bailaoras, etc. The spectators are up to a real treat to the best flamenco and one of the greatest shows of the summer.

12. Has Joaquin Cortes mentioned anything about the Marbella shows?

It is really great to work with Joaquin because he is one of the very few artists that gets involved personally in the production and the promotion. We speak almost daily about the show, the promotion, events we could organizes to promote the shows, etc. He is extremely excited about the Marbella gigs and I believe this is why he is on top of things.

13. Which other events and concerts have you organised in your professional career?

We have been promoting events since 1987 including sporting events with Andre Agassi, Stefan Edberg and Pat Cash; concerts with Sting, Pink Floyd, Jamiroquai, Tom Jones and Enrique Iglesias amongst many others; wine and food festivals; conferences with Al Gore, Francis Ford Coppola and Kofi Annan. In our website www.chrand.es you can check all our portfolio but I must mention that we are changing the name to HC-LIVE, which is the company behind the Joaquin Cortes shows.

14. You are preparing with Joaquin something very special a few days before the shows. Can you advance some details?

Indeed. We decided with Joaquin to organize a non-profit event on July 21st. Youngsters of Marbella and their parents, dance associations, dance academies, foreign residents and tourists, as well as everyone interested in dancing, flamenco and arts will have the chance to meet Joaquin in person and learn from him about those topics. Joaquin Cortes in person will address the audience talking about the mentioned topics but most important, they will be able to ask as many questions as they want. At the end of the session 20 lucky winners of a raffle will have the opportunity of meeting Joaquin backstage and have their picture taken. We still have to confirm the time and the venue.