Interview with Eva La Rue: I First Acted at the Age of 7! 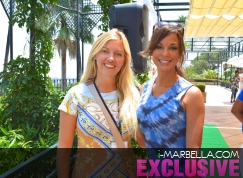 Eva Maria LaRue (born December 27, 1966) is an American model and actress. She is known for her roles as Dr. Maria Santos from All My Children and Det. Natalia Boa Vista in CSI: Miami.

LaRue began acting at the age of six and was later a teenage beauty queen. She won Danfranc Productions Miss California Empire 1984 title at the state pageant held in Irvine, California. In 1985, she graduated from Norco High School and soon after she started modeling, first working with the Judith Fontaine Agency and eventually with Frederick's of Hollywood.

1. How did you find yourself in Marbella?

2. How did you get discovered?

I started acting when I was 7, starring in commercials and working as a model. As I was born and raised in Los Angeles, I was able to get into the industry and get first-hand experience.

3. Who is your celebrity crush?

Well, to be honest, I don't really have a celebrity crush!

4. Who is most influencial celebrity in the world (not politician)?

I would say, Oprah, an American media proprietor, talk show host, actress, producer, and philanthropist. She is best known for her talk show The Oprah Winfrey Show, which was the highest-rated program of its kind in history and was nationally syndicated from 1986 to 2011.

Oprah has been ranked the richest African-American of the 20th century, the greatest black philanthropist in American history, and is currently (2015) North America's only black billionaire. Several assessments regard her as the most influential woman in the world.

5. What sould we really know about you?

Guess what, I am Puerto Rican, but don't speak Spanish very well!