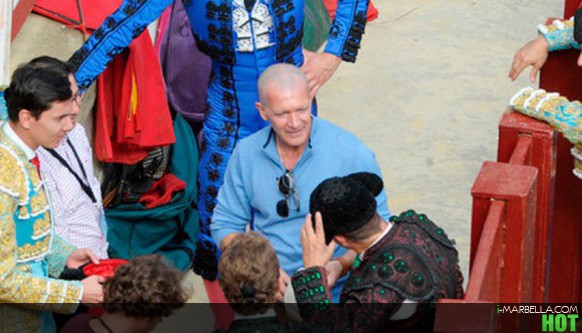 
José Antonio Domínguez Banderas, better known as Antonio Banderas, is a Spanish actor, director, and producer. He began his acting career with a series of films by director Pedro Almodóvar and then appeared in high-profile Hollywood movies, especially in the 1990s.

What kinds of parts have you never offered?

In all these years, I have never been given the chance to do science fiction -- and I have a huge soft spot for this genre. No one wanted a guy with a heavy Spanish accent on a spaceship.

In Autómata, you played opposite Melanie Griffith, from whom you are separated. What did that mean to you?

Melanie is a fantastic actor, and my feelings and our personal motives for the split are nobody's business but our own. There's a parting scene in this film, which in a certain way ends our relatinoship, just as it began with a scene in a film 20 years ago.

You will soon be portraying one of the most famous painters of all time, your fellow countryman Pablo Picasso. How did you come to snag that role?

I can't wait to get started on that project with the master filmmaker Carlos Saura. Picasso was from Málaga, just like me. The film focuses on the 33-day period in which he created his famous anti-was painting Guernica, which depicts the destruction of the town of Guernica during the Spanish Civil War.

What's your philosophy of life?

As a genuine Andalusian, I am quite convinced that the only certainty in life is death. Everything else is relative. That's why I try to use my time as well as I can. I take life with a pinch of humour. More than anything, I am an incorrigible optimist.

Do you have a secret vice?

I like to smoke, especially cigars, my favourites being Monte Christos and Cohibas. Smoking a cigar is a wonderful ritual.

Is there anything you do every day to stay healthy?

I drink huge quantities of white tea. I have also been doing yoga for 11 years. It keeps me alert and fit.