A Cuatro Manos 2016 in Marbella: 'Chef of the Century' Joël Robuchon 32 Michelin stars 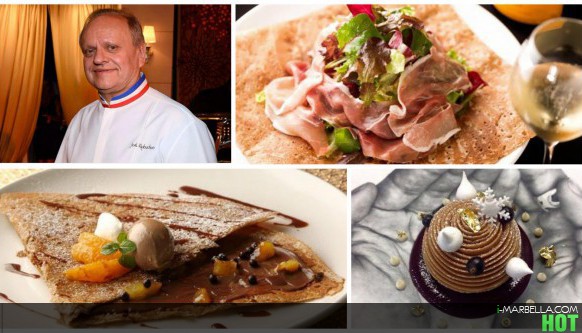 To open a series of articles, galleries, and interviews, i-Marbella would like to introduce Joël Robuchon, titled Chef of the Century by the guide Gault Millau in 1989.

He operated more than a dozen restaurants in Bangkok, Bordeaux, Hong Kong, Las Vegas, London, Macau, Monaco, Montreal, Paris, Shanghai, Singapore, Taipei, Tokyo, and New York City, with the highest record of a total of 32 Michelin Guide stars among them (31 at the time of his death), the most of any chef in the world

He has published several cookbooks in French, two of which have been translated into English, has chaired the committee for the current edition of the Larousse Gastronomique, and has hosted culinary television shows in France.

He operates a dozen restaurants in Bangkok, Bordeaux, Hong Kong, Las Vegas, London, Macau, Monaco, Paris, Singapore, Taipei, and Tokyo, with a total of 32 Michelin Guide stars among them – the most of any chef in the world.

Joël Robuchon and his team get involved into each of the restaurants, going from London to New York, and from Hong Kong to Las Vegas. Between two journeys, between two countries or two continents, he heads to his Parisian laboratory where he crafts, prepares, tests, and studies the future dishes to be offered to its customers worldwide.

In each of his restaurants throughout the world, Joël Robuchon remains faithful to his principles which made him a guide of the French gastronomy; an exceptional choice of products and ease in execution thanks to his talent in choosing and training his team.

The same touch, the same know-how, the same use of products, but a cooking adapted according to the country and its culinary traditions where epicureans throughout the world meet in the same spirit of conviviality. The concept is appealing!

Would you like to find out more about Mr Robuchon's restaurants, wine cellars, and shops, or even book your experience? Click HERE

3 Michelin Stars *** Chef Dani Garcia has organized five years A 4 Manos Gastronomic event in Marbella. Dani brought 20 Michelin Stars chefs to Marbella., who had 71 Michelin stars together.  All over the World came people to Marbella to celebrate the gastronomic days at Puente Romano.

links on www.i-marbella.com  The Fourth Edition of A Cuatro Manos cocktail in Marbella 2017 GALLERY, VIDEO