Exclusive interview with the hot girlband The Scarletz 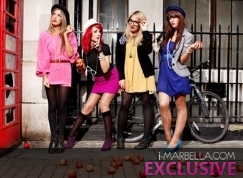 1) It’s been over a month since the Rockin Marbella concert, what have The Scarletz been up to since then?

Tahnee: We’ve been all over the shop since Marbella …Gigging loads all over the place!! The other night we did a gig and a 10K walk for the Haven House Children’s Hospice charity! We got drenched in the torrential rain we are having here in the UK but was all for a good cause! And Sunday we were in Manchester playing a set for an event called Celebrity Grilling raising money for the Manchester Children’s Hospital. Tt was a bit like Hell’s Kitchen with two teams of celebs competing against each other was so much fun!

Claire: And we went up for auction lol….the winner got the Scarletz to perform at there own private party. £3500 was the ending bid not bad for an up and coming girl band.

Tahnee: And after a manic gigging summer we are getting back in studio and cant wait! Oh and obviously we have been wreaking havoc on all who we meet!

2) With reality tv shows like X Factor monopolising the charts these days it must be harder for a group to become successful off their own steam. What do you find is the biggest hurdle for The Scarletz right now?

Bryony: Us Scarletz pride ourselves on being a bit different and indefinable, but people in general (especially the music industry) like to put music into boxes. So sometimes we struggle getting people to understand who we are and why we do want to break the mould a bit. People only want to take a chance on a tried and tested formula.

Claire: We have been told that if we take our clothes off and sing pop covers we will make it no problem lol! But obviously we wont be doing that.

Katiya: Its seems with girl bands its more difficult to make it  if you have a real talent in singing and songwriting….

Clai re: And also people just seem to like to manufacture their own girl band rather then take the same gamble on a ready made one like us, we saw this happening again on X Factor this year.

3) I hear you will be playing at the Albert Hall in October, what is that all about then?

Katiya: It’s a 50th anniversary Beatles tribute concert and we are extremely excited. Its every artists dream to sing at the Royal Albert Hall, we feel so lucky to have been chosen.

Claire: We will be singing “I Want To Hold Your Hand” and putting a Scarletz twist on it!

4) Lazybones was a great tune and I still hear it played on some of the radio stations over here, when are you planning to release a new song?

Claire: We have a new single lined up for release for Feb next year so watch this space…

Katiya: It’s a brand new track, we have never performed it live or played it to anyone so its all very exciting. We are hoping to film the video next month.

Claire: Lazy Bones was a soft release and put out there mainly for our fans and to give people a taste of what we were about. With the next single we are going to be promoting it a lot more and really pushing to get it out there.

Tahnee: It’s my fav Scarletz track and a smasher!!

5) You have worked very hard this year and won many new fans, is 2011 going to be the year of the Scarletz?

Tahnee: 2011 will be the start of the decade to The Scarletz!

Well from Celebrities in Marbella and your many fans and friends here on the Costa del Sol we wish you all the best and cannot wait to turn on the radio and here a Scarletz hit belting out!!