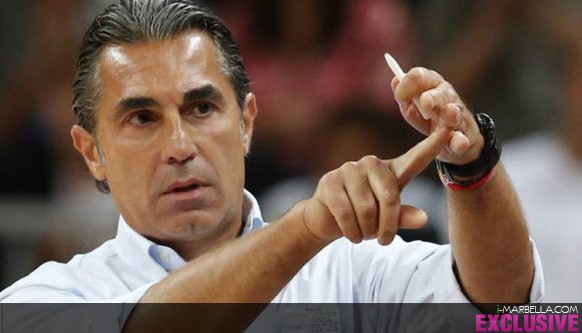 Sergio Scariolo (born April 1, 1961) is an Italian professional basketball head coach. He is the current head coach of the Spanish national team. Last June, Sergio Scariolo got a Star on Marbella Walk of Fame, in Puerto Banús.

1) Which award did you get in Marbella?

The award that I received is a gold star on Marbella Walk of Fame, in Puerto Banús, to be exact, that can well be compared to Hollywood Boulevard.

I knew that the award would be awarded to me about a year ago (Sergio Scariolo received the award on June 23, 2016), and the ceremonyitself took place in June.

If you are interested in my accomplishments in basketball, you can find the list on Wikipedia, I think this will be easier for everyone.

I am happy that the award is associated with my charity initiatives, especially, my charity foundation, which is named after my dad who died of leukemia. Eight years ago, we decided to set up the foundatinon, which is very active in Southern Spain, namely, Málaga, to help families and children suffering from different forms of cancer.

More information is available at www.fundacioncesarescariolo.org.

The ceremony was nice. The President of CIT (Centro de Iniciativas Turísticas de Marbella) and the Mayor of Marbella presented me the award in front of my friends, family as well as the viewers who happened to be there at the time.

Sergio Scariolo (on the right) Receiving the Award

5) What does the award mean to you personally?

I grew up in a team sports environment, that is why I am not a big fan of individual awards. I prefer to get European Championships and Olympic Games medals. Since the award was given by Marbella, the city me and my family chose to live in, I cannot deny that the idea of the award being something permanent throughout the time makes me happy.

6) What do Italy and Spain, Málaga and Marbella, mean to you?

After so many years in Italy and then Spain, I feel half-Italian/half-Spanish. Spain is the country I chose to live in. Madrid is a certain reference for my family. We have property, friends there. It is like a second home!

Málaga is the region that welcomed me when I was coaching Málaga team for five years that also won National King's Cup, we finished third. It was a joy for me to share emotions with Málaga fans.

Marbella is the place I chose to live in, being one of the top places in the world in terms of quality of life.

Children are ever sick here because of the great weather. The air has no signs of pollution. Sports can be played outdoors all year round.

The connections to international flights and high-speed trains are perfect. Marbella is an international city in the south of Spain. Unique, basically. There are many people here coming from everywhere in the world.