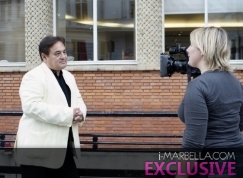 
Mac Chakaveh, the festival director, gave us an insight what the Marbella International Film Festival is all about! Read the interview with him below!

We have received over 1000 submissions from all over the world and are screening 47 films from the world cinema, these are the best of the best so you can just imagine the quality of the films being screened from 14th to 16th October 2011, at H10 Andalucia plaza hotel, Puerto Banus.

The festival is ever growing, year after year, the number of delegates and production companies that are visiting the festival this year is the highest we had, but what is more exciting is that we have delegates and production companies visiting from China, Brazil, India, Qatar,  Israel, as well as of course UK, USA, Spain and Canada, so this is going to be an outstanding networking event as well as obviously the chance to see some fantastic movies.

3.      How long have you been organising Marbella Film Festival?

The festival was created by New World Trust, which is a none profit organisation, established to support and promote the independent artists and film makers from all over the world, the project started in 2005 and first festival was held in 2006, in Marbella.

This is a yearlong event, because not only we have the festival in Marbella, but also festival goes on a world tour, we take Marbella International Film Festival, and all our associates and sponsors to many cities of the world, promoting, Marbella, as a wonderful location, promoting our Local associates and all who benefit from potential visitors to the region, in many cases reaching out to people who have never been to Marbella but are familiar with the name and just need a bit of encouragement to make the trip.

As part of the festival world tour we have regular events in London, in Miami and L.A, We represent MIFF at Cannes film festival every year and then have individual trips to other parts of the world too, for instance I am about to travel to Georgia and as the guest of Batumi Film Festival, I shall be giving a presentation about Marbella as well as the business of International Film Festivals.

Later in the year we have also a trip planed to take MIFF to Dubai, so you see the festival is busy all year round, promoting Marbella, the independent film makers and artists and generating commercial opportunities for all involved.

However the mechanics of organising a festival is an art by itself, calls for submissions, receiving all documents and films, viewing and judging hundreds of films, organising the events, publicising the films, promoting the film makers , working with media, the list goes on, such a work requires a dedicated team of professionals, who can deliver an outstanding world event.

We are so lucky to have such great team, in Marbella, in London, and in many other cities across the world, and the support of volunteers in creating a successful project is the main key to our progress.

5.      What are the movies at the festival you are waiting to see the most yourself?

Now that would be telling! I am the director of the festival, so I could not possibly pick one film out of the 47 being screened, all I can say is to visit our site www.marbellafilmfestival.com and see the details of the films being screened, most have trailers, which should give you a good idea of what to expect, all films are either in English with Spanish subtitles or if not in English, have English subtitles, so the patrons can enjoy the true taste of the world cinema.

6.      Are there any celebrities coming to the festival?

The festival is a film industry event, we are not holding celebrity events with photo ops, this is an opportunity for the film makers to meet and network, to promote their film internationally and to contact potential cast, crew and even more importantly financial backers for their next projects, so the objective is not to offer a celebrity show,  however many famous film makers and artists are passionate about independent film industry and come to represent their films as well as make contacts for their future projects.

We are pleased to have been informed that Les Dennis is coming to support his film “Wounded” and are waiting for confirmation from Bill Nighy for attending the festival supporting his film.

We have also been advised that The QPR Football Club Manager and few players would be attending the screening of the documentary “Four Year Plan” which is having its world  premier in Marbella, as part of MIFF. There might also be few other surprise who might want to attend without too much publicity.

The future looks great, it has taken us over seven years of hard work by an extremely dedicated team to establish an internationally renowned film festival. Not blowing our own trumpet, but when considering the tough economic and political conditions at the time that the festival started, and the high ranking that MIFF has achieved in such short period of time, among the world’s long established festivals which have been going for many years with the financial support of national and local governments, I think we deserve a pat on the back to have achieve what we had without any such support.

The future looks great! We have wonderful local and international partners, we have the full support of Marbella Town Hall, Junta Andalucia government, the National, regional and local Spanish film commission, as well as association with many international organisations.

This project not only attracts young people to participate in something exciting and creative, but also offers an outstanding opportunity for the new film makers and hopeful artists, and anyone associated with the film industry to create their first show reel, and to achieve credits for having been associated with an international project.

Such credit in the competitive film industry is invaluable. Every year I have the pleasure of hearing from the challengers, how having been involved with this project had helped them to get international recognition and work opportunities, which after all that is what the festival is all about, helping and supporting independent artists while promoting Marbella.

However, We are not being complacent, we know that the hard work must carry on, and the achieving our objectives shall always remain the main goal of the festival, its team and its associates.