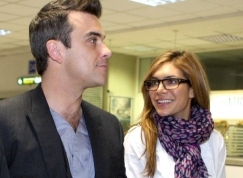 
Robbie Williams broke off his romance with girlfriend Ayda Field three times because he was terrified of commitment.

The British pop singer has called the American actress his "soulmate" but he wasn't convinced she was the one for him in their first year of dating - until Field managed to charm his bachelor dad, Peter.

He says, "We broke up about three times in the first year because of menot trusting and not knowing that I really needed this and really wanted it. I will bolt at any sign of anything. And if there wasn't one I'd make one up. But she just kept on being thiswonderful person."

"My dad met her and as he was leaving he turned to me and said, 'You'rein trouble there, son' - as there was no reason to bolt. After a while I just saw what was there a massive-hearted, lovely human being who wants to take care of me and I want to do the same for her".

But the Angels hitmaker insists he doesn't mind waiting before they start a family, adding, "Ayda wants to go for it straight away. But I want Ayda to myself for as long as I can because I'm selfish. It will happen, but it won't be soon".

Robbie Williams gets a pre-nup