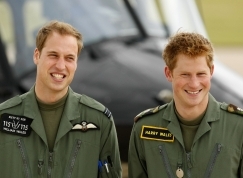 
It has been reported that the Princes William and Harry have invested a six-figure sum of their own money into the foundation. It will be the primary vehicle for their charitable activities in the future.

The organization will help the psychological and physical recovery of British soldiers, young people in need and help develop villages in Africa.

Trustees of the this foundation include Queen Elizabeth II’s most trusted adviser, Lord Janvrin, her former private secretary, plus Fiona Shackleton, a lawyer for Prince Charles during his divorce from Princess Diana.

In addition, Prince Harry’s Sentebale charity, which helps AIDS orphans in the African Kingdom of Lesotho, will operate independently of the foundation.