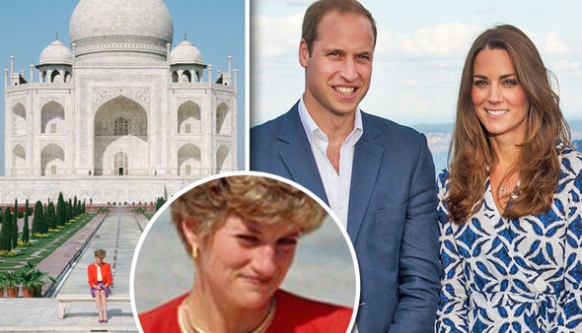 The Duke and Duchess of Cambridge are to follow in the footsteps of Princess Diana and visit the Taj Mahal on a landmark tour of India and Bhutan.

Kensington Palace today confirmed ‎that Prince William and Kate will go to India's most iconic tourist attraction where Diana famously posed for a picture in February 1992, illustrating her estrangement from Prince Charles.

The Taj was built by the Mughal emperor Shah Jahan to symbolise his eternal love for his wife Mumtaz Mahal, who died aged 39 in 1631.

Many royal watchers had thought that William and Kate would not want to revive memories of Charles and Diana's marriage but India was keen to show off its crown jewel.

In stories picked up by the Sunday Express, the host nation's newspapers reported several weeks ago that a party of British high commission officials and royal aides had been to Agra to plan that part of the visit.

Kensington Palace said the tour of India and Bhutan will be from April 10 to 16. They will travel to Bhutan on April 14 before returning to India to complete the tour.

The visit is being undertaken at the request of the British Government. It will be the first time that the couple have visited either country.

In a statement, the palace said: "In India, the Duke and Duchess will see a variety of aspects of contemporary Indian life, focusing on young people, sport, entrepreneurship, Indian efforts to relieve urban poverty, the creative arts, and rural life.

"Their Royal Highnesses will begin their visit in the creative and business hub of Mumbai.

"They will then travel to the capital New Delhi, which is the seat of history and politics in the world's largest democracy.

"In Kaziranga National Park, the Duke and Duchess will experience the rich variety of wildlife and also pay tribute to the rural traditions of the communities who live around the park.

"In Bhutan, the Duke and Duchess of Cambridge are very much looking forward to meeting Their Majesties The King and Queen of Bhutan, and continuing the relationship between their two families. They will also have the opportunity to learn more about the heritage and culture of this beautiful mountain kingdom and its people."

William and Kate, who will leave Prince George and Princess Charlotte behind with their nanny and most likely Kate's parents, will conclude their tour back in India at the UNESCO World Heritage site the Taj Mahal on April 16.

A Kensington Palace spokesman said: "The Duke and Duchess are very much looking forward to their tours of India and Bhutan.

"Their visit to India will be an introduction to a country that they plan to build an enduring relationship with.

"They will pay tribute to India's proud history, but also are keen to understand the hopes and aspirations of young Indian people and the major role they will play in shaping the 21st century.

"Their visit to Bhutan will allow them to continue a relationship between two Royal Families by meeting the King and Queen.

"The Duke and Duchess have heard many wonderful things about the country and are grateful to have this opportunity to get to know the Bhutanese people.

"This tour, coming shortly before The Queen's 90th birthday, will also allow The Duke and Duchess to pay tribute to Her Majesty's huge contribution to diplomacy in Britain and the Commonwealth."

Further details will be published nearer the time but in India, the Duke and Duchess will visit‎ Mumbai on April 10 and 11, New Delhi on April 11 and 12, Kaziranga on April 12 and 13, and Agra on April 16.

In Bhutan, they will visit Thimphu on April 14 and 15.