Will Smith to run for president? 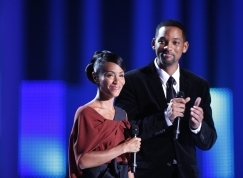 
Actor Will Smith is seriously considering leaving acting to pursue politics - and he has his eye on Barack Obama's job.

Will´s wife Jada Pinkett Smith said, “Will is thinking about going into politics. He once said he could imagine becoming a US president. He wasn’t joking, he was quite serious about it.” So how does his wife, who clearly wears the pants in the family, feel about his new career move? “It’s just not for me,” she added.

While Will has his eye on the White House, Jada would rather focus her energy on the education system in the US. The couple has already set up the Will and Jada Smith Family Foundation, a charity which focuses on helping youths in urban inner cities, but that's not enough for Jada. “Will and I want to leave traces on this planet – and with that I mean more important traces than just films," she added.

What do you think about Will going into politics? Does he have what it takes to be President of the United States?

Willow Smith: I Get My Flow From Daddy