Will Smith's Son is the New Karate Kid 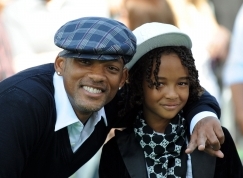 Will Smith with his son Jaden. Source: Scanpix/AFP


Learning the moves of a true martial arts fighter, Will Smith's youngest son Jaden Smith is proving he has what it takes when he stars opposite Jackie Chan in a remake of the 1984 classic, The Karate Kid.

"I trained every day for four months with Master Wu [the film's fight coordinator]," Jaden (11) tells People magazine, as he takes on his first leading role as an American boy named Dre Parker who moves to China. "We did a lot of stretching."

Jaden mastered front kicks and upper blocks through his hard work ethic and dedication, says Chan (55) who plays maintenance man Mr. Han – an unlikely friend to Jaden's character. "He took the training very seriously. I was very impressed with him," he adds.

While filming in Beijing, Chan was more than a martial arts mentor to his young costar. "Jackie taught me to ask, 'My left or camera left?'" says Jaden on learning the important directions of acting in front of the movie camera. "That helped."

As the two stars built a dynamic relationship on screen, the teacher and student bond translated into real life. "Jaden had a lot of respect for me as his teacher, even off the set," says Chan. "He is professional as many adult actors who have been in the business for years."

And, as Jaden became a true karate kid, he realized that there is more to martial arts than just the kicking and punching – there are lasting lessons of obedience to be instilled. In fact Jaden's parents appreciate the discipline he learned. "His dad (Will Smith) told me that Jaden had changed," says Chan. "When he takes his shoes off, he doesn't throw them in the corner, but puts them away neatly!"

Will Smith to run for president? (2)

Willow Smith: I Get My Flow From Daddy