Who wore a dress with hairly legs? 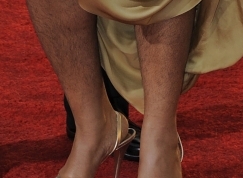 The actress, who picked up the award of Best Supporting Actress for her role as an abusive mother in Precious, was pictured hitching up her dress to show off her less than smooth legs on the red carpet at the star-studded event.

It is not the first time the actress and comedian, real name Monique Imes, has revealed her lack of grooming. During a 2006 appearance on U.S. talk show The View, she told host Barbara Walters: 'I must show America what a real leg looks like … because it's too much in the morning, every morning, to shave, to cut, you got Band-aids baby.'

Thankfully though she did admit to shaving her armpit hair to avoid what she called "stink".