Who will become Richest Celebrities in Britain? 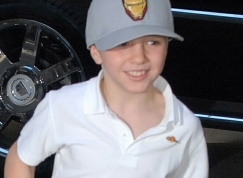 
Madonna's son Rocco Ritchie (9) and David and Victoria's son, Cruz Beckham (4) are tipped to have the most earning power in a new report which assessed the estimated worth of today's celebrity children in 20 years time.

The report estimated Rocco to be worth $627 million dollars (£376 million) before he reaches 30. Celebrity expert Mark Frith said: "Rocco will earn a fortune from his mother and a fair bit from dad. But it's the other three rankings that power him to the number one place."

Cruz Beckham is second place on the list, but don't feel too bad for him. He'll still inherit and/or make more money by his 30th birthday than most of us will in our lifetimes.

Check out who´s also in the „Richie Rich“ list!