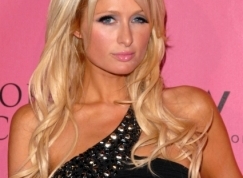 
The heiress just landed in the South of France where she’s schmoozing with A-listers, coming right off a quick business trip to Madrid.

Paris tweeted today, “Cannes is Amazing! We have the most incredible yacht and I'm with the people I love most! My friends and family.”

But is there another possible love interest waiting in the wings? We hear soccer stud Christiano Ronaldo is itching to see the blonde again—it’s been almost a year since they first hooked up after partying at MyHouse in LA.

A source tells E!, "He texted her when he found out she was there, but she only had a few hours because she was in back-to-back meetings. So they didn't end up meeting up." But that doesn’t mean there won’t be more opportunities in the near future! As Hollyscoop has previously reported, Paris is planning on heading down to South Africa for the World Cup next month, and obvs Cristiano will be there!

A source close to him says, "Cristiano has never stopped talking to Paris since their hot romance last year. He thinks that she's sexy and so much fun to be around."

But it sounds like Paris is calling the shots these days! "She obviously thinks he's gorgeous and very sweet but she's not interested in getting serious with anyone right now,” says a source close to the heiress. “She's having way too much fun being single."