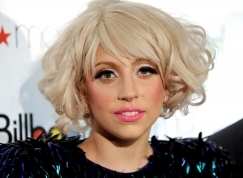 
Singer Lady Gaga was snapped by acclaimed photographer David LaChapelle for a series of images that perfectly match her bizarre, sexy and outrageous personality.

The shots feature in the super deluxe limited edition of her new album The Fame Monster which contains all the original tracks from her debut CD The Fame, plus eight new ones. Not only does it come with a booklet containing these amazing pictures, but giving fans a very unusual and very weird treat, she has also included a lock of her hair.

Even her good friend Kanye West took part of the crazy photoshoot. Completely naked, GaGa lies in his arms with one hand covering her breast, as he stares zombie-like into the distance as a volcano rages behind them.

Could Lady Gaga´s outfits get any weirder? (2)

PHOTO: Before the Lady Went Gaga (20)