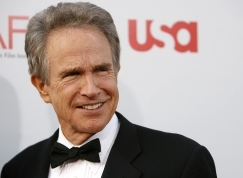 
Warren Beatty's legendary gold crown for womanizing is about to get some added polish, with this week's publication of Star: How Warren Beatty Seduced America – though the 72-year-old star has already issued a statement though his attorney to refute the book's claims.

"Using simple arithmetic," author Peter Biskind calculates, according to New York Post, Beatty bedded "12,775 women, give or take, a figure that does not include daytime quickies, drive-bys, casual gropings, stolen kisses and so on."

But in a statement to the Huffington Post, Beatty's attorney, Bertram Fields, denies that the book – which the Post reported was authorized – was, in fact, sanctioned by the actor.

Among Beatty's conquests, Biskind writes, the Bonnie and Clyde, Heaven Can Wait and Reds star-producer can claim Jane Fonda (who at first thought her costar was gay), Joan Collins (whom he exhausted), Leslie Caron, Isabelle Adjani, Julie Christie, Diane Keaton, Madonna and, of course, the actress Beatty married in 1992, Annette Bening.