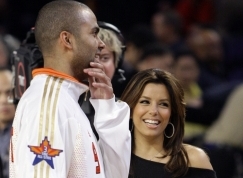 "It's Eva's favorite film," Parker says in video, also posted on his Web site, of the 1978 musical starring John Travolta and Olivia Newton-John.

But fandom isn't the only reason the two decided to tackle the iconic song and dance. In the video, the basketball star explains that he and his wife have a challenge for their fans. "I've decided to play a game with you," he says, inviting viewers to submit similar parody videos of musical comedies – in full costume. Says Parker: "Now it's your turn."

Longoria Parker and her hubby will watch the entries – which are due on Jan. 31 – and pick a winner whom they'll fly to San Antonio, Texas, to catch Parker in action with the Spurs.

How Eva Found Out Tony Was Cheating