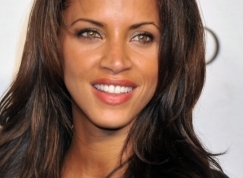 
French model Noemie Lenoir reportedly tried to take her own life on Sunday afternoon. The Gap and Victoria's Secret model was found unconscious in a forest in La Celle-Saint-Cloud outside Paris.

The 30-year-old model is believed to have taken a potentially lethal cocktail of drugs and alcohol and drugs at the home of her on-again, off-again boyfriend, ex-Chelsea football star Claude Makelele. Makelele is also the father to her five-year-old son Kelyan. After Makelele called the police, Lenoir woke up minutes later and canceled the ambulance. Then she left the house and was again found unconscious by a man walking his dog several hours later on a forest trail.

A source close to the model said: "After coming to, Noemie was in a state of great distress and clearly very ill. She had clearly attempted to harm herself and had fallen unconscious. She was rushed to a nearby hospital and treated for the effects of poisoning. It seems that she may have tried to commit suicide as a cry for help. She's now in a far better condition and recovering."

A spokesman for the Paris police confirmed "A young woman age 30 was found unconscious in La Celle-Saint-Cloud on Sunday afternoon....She was rushed to hospital for treatment for the effects of an overdose. She is now recovering well."

Also Lenoir had been experiencing "extreme angst" over her romantic relationship with Carl Hirschmann who is involved in a blackmail, sex, and extortion scandal in his native Switzerland. Lenoir has reportedly been visiting him often in Zurich, where the millionaire is accused of giving models vodka-based drinks called "Love Potion," then videotaping them in sex acts before allegedly blackmailing them with the videotapes. Hirschmann, who dated Paris Hilton in 2003, is pleading not guilty.