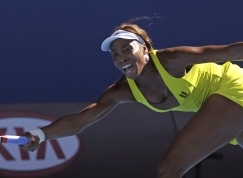 
Venus Williams appeared to be flashing rather too much flesh at the Australian Open yesterday. But closer inspection revealed that the five-times Wimbledon champion was actually preserving her modesty with flesh-coloured underwear.

Williams’s outfit attracted a great deal of speculation on the internet, with dozens of fans asking her via the Twitter social networking site if she had ‘gone commando’ – or worn no underwear – on court.

She explained to fans: ‘My dress for the Australian Open has been one of my best designs ever! It’s all about the slits and V-neck. I am wearing undershorts the same colour as my skin, so it gives the slits in my dress the full effect!’ Venus added: ‘This is completely my design. I just sketched it out. The whole idea is just about the illusion that I’m wearing a deep V-neck. Then the idea was to wear shorts that were like the same colour as my skin. It works very well, apparently.

Williams recently completed a fashion degree while on tour, and has launched her own clothing line called EleVen and interior design company, VStarr.

The extra attention did nothing to distract the American from her third round match against Australian Casey Dellacqua, which she won comfortably in two sets .