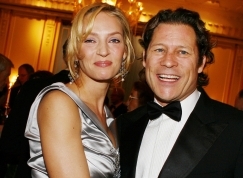 The couple began dating in the summer of 2007, and one year later, Busson proposed with an 8-plus carat engagement ring. Just don't expect to see that ring on Thurman's finger anytime soon. "She will probably give it back," says the source. "She wants to return everything that is his."

In September, Thurman (39) admitted she wasn't planning to marry her London-based fiancé anytime soon. Perhaps their long-distance love affair was a factor.

Angelina Jolie had an affair with Ethan Hawke!