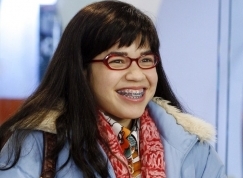 
The hit serial Ugly Betty has been canceled by ABC. The current fourth season will stay the last for the girl who made curves popular all over the world. According to Entertainment Weekly, the fourth season of the show will also be cut from 22 to 20 episodes.

The ratings have dipped significantly since the premiere of the show. Executive producer Silvio Horta and ABC president Steve McPherson said in a joint statement: “We’ve mutually come to the difficult decision to make this Ugly Betty’s final season, and are announcing now as we want to allow the show ample time to write a satisfying conclusion. We are extremely proud of this groundbreaking series, and felt it was important to give the fans a proper farewell.”

At least we heared there´s going to be a really good show finale!