U2 Has Highest Ticket Sales of the Year 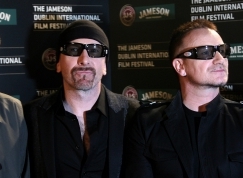 
The Irish rockers have been named the top-grossing North American touring act of the year. According to concert tracker Pollstar, U2 grossed $123 million, selling more than 1.3 million tickets.

Their 360 Tour spanned across the United States in every major city, and is now gearing up to cross the ocean for Europe in 2010!

Pollstar noted that the touring business boomed last year, despite the economy.

Here are the rest of the top ten: