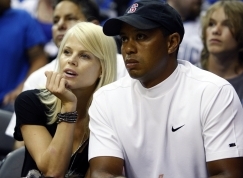 
Woods was involved in a car accident yesterday and had some injuries to the face. TMZ reports that those injuries were not caused by the accident, but by his wife.

His wife, Elin Nordegren reportedly confronted him about the rumors that he was having an affair with another woman and things got dirty. The argument reportedly got heated leading her to scratch Tiger's face. He then tried to flee the scene but he didn't get too far.

When Woods crashed the car, Elin broke the back window and helped him out of the car. There are reports that she was hitting the car with a golf club when he crashed. That's when Woods became "distracted," and hit the fire hydrant.

Police are yet to interview Woods at his house. They have been turned away twice by his wife.