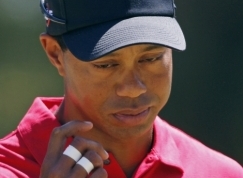 
When Tiger Woods admitted he was "a little nervous" returning to the golf world, did he sense trouble with his game?

The champion golfer, who's slowly integrated himself back in the sport after a sex scandal broke in November, has had a tough few weeks – and his woes seem to keep piling up.

Less than two weeks after missing the cut at the Quail Hollow Championship in Charlotte, N.C., Woods, 34, dropped out of The Players Championship Sunday after suffering from a neck injury. Two days later, his coach, Hank Haney, resigned via text message. For me not to play all 18 holes [at TPC], that was as angry and as frustrated as I've been in a long time," Woods said Monday at a news conference.

Though he doesn't blame the neck injury on his Nov. 27 car accident, the golfer calls the pain "annoying." "[The injury] actually was getting worse," Woods said, "and now I'm at a point now where I just can't go anymore." More than the physical problems, Woods acknowledges he's also struggling mentally.

"[My game is] certainly not where I would like to have it, there's no doubt," he told reporters. "There's a lot of things going on in my life, period, right now. [I'm] just trying to get everything in a harmonious spot, and that's not easy to do."  And while Woods has not indicated whether he and wife Elin Nordegren are heading for divorce, sources have said their five-year marriage is as wobbly as ever and it wouldn't be a surprise "if [Elin] files for divorce sometime soon."

Sources believe Nordegren wants to spend time more time in her native Sweden, where she recently vacationed with their two children, Sam, nearly 3, and Charlie, 1.  "The deal making between [them] will be interesting," another source tells PEOPLE.