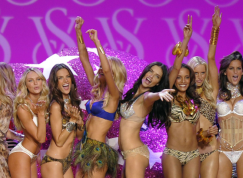 
American brand Victoria's Secret was created on 1977 and is known for its annual fashion show, and for its catalogs that both feature top fashion models.

All the fashion show models are now being called "Runway Angels", because the Angels is a Victoria's Secret's lingerie line. The models featured in the original advertising campaign back in the year of 97 were Helena Christensen, Karen Mulder, Daniela Pestova, Stephanie Seymour, and Tyra Banks.

The models have changed from year to year and at the moment the brand has 13 supermodels working for them, including Marisa Miller. The Victoria's Secret Angels have also been chosen to be part of People Magazine's annual "100 Most Beautiful People in the World" issue in 2007 and it became the first trademark awarded a star on the Hollywood Walk of Fame on November 13, 2007.

Jennifer Hudson before and after the weight-loss!Gallery!