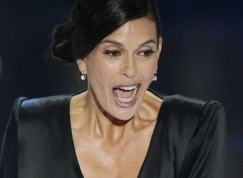 
No one is safe from the Swine flu - not even the ladies from Wisteria Lane! Desperate Housewives star Teri Hatcher is the latest celebrity to get diagnosed with the H1N1 virus.

According to Hollyscoop, the entire cast is on swine flu alert after Hatcher informed producers this morning that she was diagnosed. The producers are now trying to schedule around Hatcher's shoots until she's cleared of the virus.

According to TV Guide, the timing couldn't be worse because they were plotting out their big neighborhood Christmas party stunt. The stunt includes a small plane crashing their festivities and it was supposed to feature the entire cast.